Types of bridge and bridge components

Bridges are generally made of various types and materials and an essential part of transportation.

Bridge: It is mainly a structure which is built to stretch physical obstacles without closing the original way underneath like a body of water, valley or road etc. to make a passage over the hurdle.

There are lots of different designs from which each of them can be served for a distinct purpose and can be applied in different situations. The designs of the bridges differ as per the function of the bridge, the nature of the soil where the bridge has constructed and anchored, the material used to make it and the available funds for it.

There are mainly 4 types of bridges such as, 1) Bridges by Structure, 2) Fixed or Movable Bridges, 3) Types by Use and 4) types of Materials.

1. Arch bridges: The bridges use arch as a main structural element and also made with one or more articulations depended on the kind of load and stress forces endured. Ex: - ?Old Bridge? in Mostar, ?Bosnia and Herzegovina? and the ?Hell Gate Bridge? in New York.

2. Beam bridges: They are very basic type of bridges which are supported by many beams of various shapes and sizes like inclined or V shaped. Ex: - ?Lake Pontchartrain Causeway? in Southern Louisiana.

3. Truss bridges: They mainly use diagonal mesh of posts above the bridge and two most common designs are the King posts and queen posts.

4. Cantilever bridges: They are like the arch bridges in appearance but support their load through the diagonal bracing than vertical bracing and often use truss formation both in the below and the above the bridge. Ex: - ?Queensboro Bridge? in New York City.

5. Tied arch bridges: Same appearance of the arch bridges but transfer weight of the bride and traffic load on the upper chord that is connected at the bottom cords in bridge foundation and these types of bridges are often called bowstring arches or bridges.

6. Suspension bridges: These kinds of bridges generally use ropes or cables from the vertical suspender for holding the weight of bridge deck and traffic. Ex: - ?Golden Gate Bridge? in San Francisco.

7. Cable-stayed bridges: They use deck cables which are straightly connected to one or more vertical columns as cables generally connected to columns in two ways- harp design and fan design.

Fixed or movable types of bridges:

1. Fixed: Most of the bridges in this world are fixed and have no movable parts for providing higher clearance for river or sea transportation which flows below them. These bridges are mainly designed for staying in one place till their demolishing.
2. Temporary bridges: These bridges are made of modular basic objects which can be moved by medium or light machinery and used in military engineering or in circumstances as in time of fixing or repairing.
3. Moveable bridges: Powered by electricity and have moveable decks also.

1. Car traffic: They are usually very common and have two or more than two lanes which are designed for carrying car and truck traffic of various depths.
2. Pedestrian bridges: They are generally found in the urban environments where car transportation way is through the soils of rough mountains, forests etc.
3. Double-decked bridges: They are naturally built to maintain as better as the traffic movement can be flowed across bodies of water or rough land. They often have large amount of car lanes and sometimes have the dedicated areas for train tracks.
4. Train bridges: Especially made for carrying one or more than one lanes of train tracks.
5. Pipelines: They can carry water, air, gas and communication cables in the water or remote lands.
6. Viaducts: They are old-fashioned structures which are created for carrying water in the prosperous areas to dry cities.
7. Commercial bridges: Modern bridges are now built as a decoration to the commercial buildings like restaurants and shops.

Types by materials: Natural materials like wood, stone, concrete and steel and some other advanced materials. 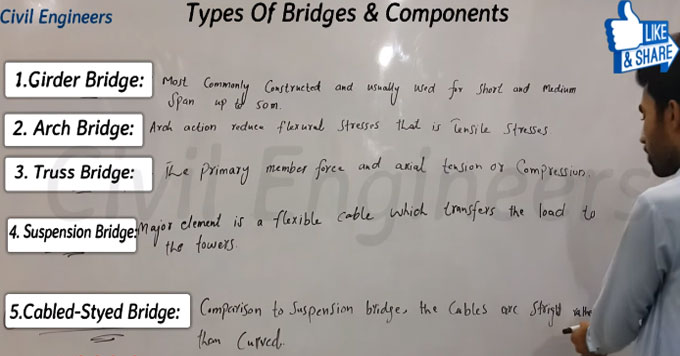