Some common types of columns (14 types) in building construction

Various sections of structures are supported with different types of columns. Column stands for a vertical structural member that bears loads primarily in compression.

It generally transmits loads from a ceiling, floor slab, roof slab, or from a beam, to a floor or foundations.

Usually, columns also bear bending moments about one or both of the cross-section axes. Given below, the detail lists of columns mostly found in building construction :-

Columns are categorized on the basis of the following factors :

Depending on types of reinforcement:

1. TIED COLUMN: Reinforced concrete is the prime material to build up this type of column. Longitudinal reinforcement is enclosed inside narrowly placed tie reinforcement. It is considered that 95% of all columns in buildings are tied.

3. COMPOSITE COLUMN: A composite column is formed if the longitudinal reinforcement is in the form of structural steel section or pipe including or excluding of longitudinal bars.

4. AXIALLY LOADED COLUMN: If vertical axial loads operate on the center of gravity of the cross-section of the column, then it is called as axially loaded column.

Axially loaded column is seldom found in construction as synchronizing vertical loads on the center of gravity of column cross section is not possible.

Instance of this type of column is Interior column of multi-storey buildings having symmetrical loads from floor slabs from all sides.

Column with uniaxial loading are usually adopted in the case of columns firmly attached with beam from one side only like edge columns.

6. COLUMN WITH BIAXIAL ECCENTRIC LOADING: When vertical on the column is not synchronized with center of gravity of column cross section and does not operate on either axis (X and Y axis), then the column is known as biaxially eccentric loaded column.

Columns with biaxial loading are normally found in corner columns having beams firmly attached with right angles at the top of columns. 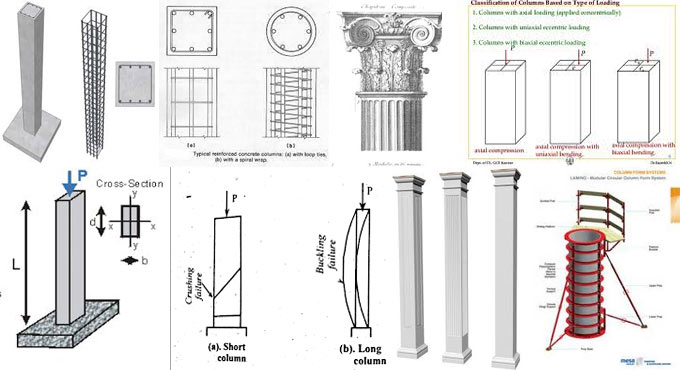