In engineering, a truss belongs to a structure that contains two-force members only. The members are arranged in order that the truss can act like a single object. The truss facilitates the structures to transmit weight to its foundations and anchors securely.

The members of truss are only dependent on axial compression and tension and not on bending moment.

The truss employs a web of triangles which are attached in order that pressure and tension are used to the points of the corners of every triangle to make them stable for providing support to structure. By associating a wide array of trusses collectively, significant amount of weight can be transmitted securely to load-bearing beams, wall or to the ground directly.

Generally, the trusses are categories as Warren truss, Pratt truss and Howe truss.

Warren truss is supported with a set of isosceles triangles or equilateral triangles. The verticals are included with Warren Truss with the purpose of raising the span length of the truss bridge.

Pratt truss is defined by its diagonal members (excluding the end diagonals) which are sloped down towards the middle of the bridge span. This type of structural arrangement is based on when external loads tension is caused in diagonal members whereas the vertical members manage compressive forces. Therefore, thinner and lighter steel or iron is applied as materials for diagonal members with the purpose of building up a more well-organized structure.

The design of Howe truss is contrary to that of Pratt truss in which the diagonal members are sloped in the direction contradictory to that of Pratt truss (i.e. slanting away from the middle of bridge span) and as such compressive forces are formed in diagonal members. Therefore, it is not cost-effective to employ steel members to deal with compressive force. 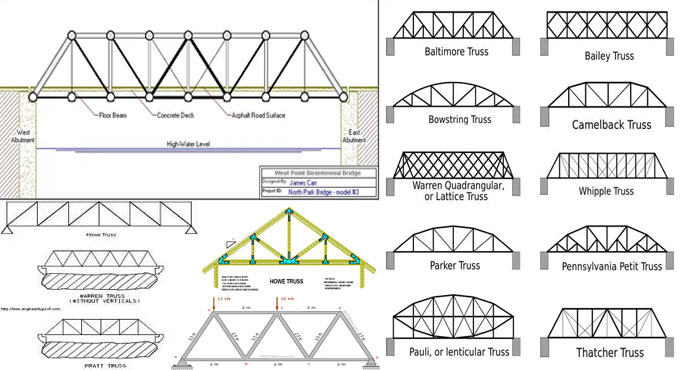