3D Printed Concrete: A next generation of concrete which may rule in the future of Construction World

3D printed Concrete could change the landscape of the architecture & construction world. Since 3D printing can produce new shapes and forms that current technologies are unable to, it could lead to a change in the centuries-old methods that are still used to construct buildings.

In general, the construction industry has trouble with sustainability. It creates hoops that need to be jumped through in order to maintain its insatiable appetite for concrete.

Why you use Glass?

But concrete can have a negative impact on the environment. Due to the exponential increase in demand for concrete, river sand has been extracted indefinitely, causing ecological imbalance. Concrete is made from Portland cement, water, and aggregates such as sand and gravel.

As glass is made from sand and can be recycled easily, it can be made into concrete. However, millions of tons of waste glass are generated worldwide annually that ends up in landfills.

Throughout the process, bottles were crushed, then the crushed pieces were washed, dried, ground, milled, and sieved. The particles resulting from the process were smaller than a millimeter square, so they were used to replace sand in concrete.

Using the concrete produced, 3D-printed wall materials and prefabricated building blocks were developed for a brand new building. Not only is the new concrete perfect for recycling waste glass, but it's also more durable and requires less maintenance.

A product of these processes, similar to sand, is used in the manufacturing of concrete. By 3D printing, prefabricated elements of walls and blocks can be created, allowing for the construction of buildings according to updated designs and time periods.

Glass contributes beyond sustainable & it contributes to the creation of concrete with superior properties to concrete containing natural sand. In addition, soda-lime glass concrete has better insulation properties, thanks to a thermal conductivity that is three times lower than that of traditional concrete. This feature can allow buildings to use less energy for cooling and heating.

Sustainability without compromising the Quality

The research also involved replacing ordinary cement in concrete with limestone powder without compromising its quality.

In concrete, cement is used to bind the ingredients and harden them. However, the production of cement contributes to global warming and rapid climatic change by releasing huge amounts of carbon dioxide into the atmosphere.

As glass has a much lower thermal conductivity than quartz aggregate, a major component of concrete, concrete made from recycled glass is more insulating.

As a result of the presence of glass, concrete that has superior properties to concrete made from natural sand is not only a solution for waste, but also a means of obtaining concrete that is free of harmful pollutants. 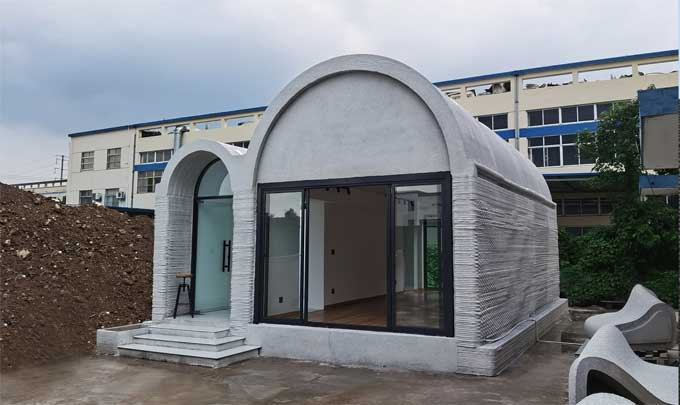