Concrete becomes leading usable material as soon as water is added to it. The strength of concrete is mainly dependent on aggregates, while cement and sand are responsible for the characteristic of binding and workability together with flowability to concrete.

With compressive test, the push force enforced on the both faces of concrete specimen and the maximum compression borne by concrete devoid of failure is recorded.

In technical term, Compressive Strength of concrete is explained as the Characteristic strength of 150mm size concrete cubes @28 days.

Compressive strength of Concrete and its advantages:-

Concrete is formed by mixing sand, cement, and aggregate. The strength of the concrete is based on several factors which range from individual compressive strength of its materials (Cement, Sand, aggregate), quality of materials applied, air entrainment mix proportions, water-cement ratio, curing methods and temperature effects.

With Compressive strength, the entire strength of the concrete as well as information on the above mentioned factors can be obtained. By initiating this test, it is possible to analyze the concrete strength psi and quality of concrete formed.

The compressive strength of concrete is influenced by the factors given below:-

Coarse aggregate: Concrete becomes uniform by blending aggregates, cement, sand, water and different other admixtures. In spite of perfect mixing, some micro cracks may occur because of variations in thermal and mechanical properties of coarse aggregates and cement matrix, which results in collapsing of concrete structures.

But later on, it is discovered that bigger size of aggregates can raise strength in preliminary stage but the strength is decreased greatly. It happens because of the abridged surface area for bond strength among cement matrix and aggregates and lower transition zone.

Air-entrainment: Air entrainment in concrete is a useful feature to avoid damages because of freezing and thawing. Later on, multidimensional benefits of air entrainment lead to improve the workability of concrete at lower water/cement ratio.

Water/Cement ratio: Excessive water is injurious to the strength of concrete. Cement is considered as the major binding material in concrete that requires water for hydration process, but the water quantity is constrained to about (0.20 to 0.25) % of cement content. The excess water is useful in case of workability and finishing of concrete.

When the water in the concrete matrix gets dried, it departs large interstitial spaces between aggregate and cement grains. This interstitial space in turn creates primary cracks throughout compressive strength testing of concrete.

Go through the following article, to get more details civilread.com 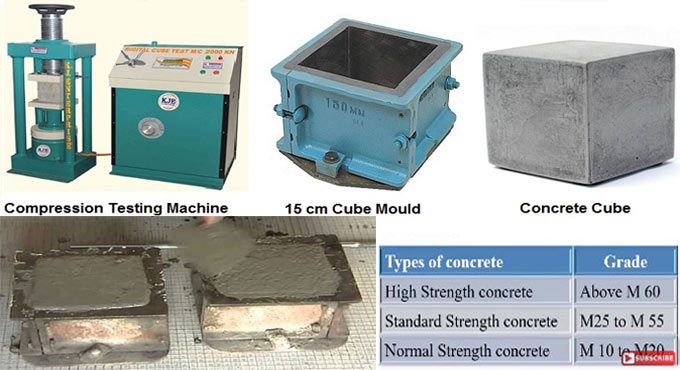