To operate as reinforced concrete member, the strain of steel should be equivalent as that of concrete; with the existence of any slip, the composite action of concrete and steel will become invalid. Reinforcing bars in concrete beams undergo two types of failure under bond stress like Direct pullout and Splitting.

This type of failure happens to those beams where there is adequate confinement in adjacent concrete for reinforcing bars. Direct pullout failure occurs under the following conditions :-

Confined bars in adjacent concrete, when exposed to tensile force, adhesive bond other than friction among two materials turns out to be mobilized. When both obstructions are suppressed, adjacent concrete is crushed ultimately prior to deformations on the bar surface and this local crushing leads to detachment of bars.

Adjacent concrete, except for that has been crushed prior to ribs just nearby interface of bars, persists intact. For deformed bars, mechanical interlock with adjoining concrete arranged by deformations is more crucial as compared to adhesive force and friction.

Splitting failure: Under this type of failure, concrete is broken along specific length of bars. When a beam or any flexure member deflects, a wedging action is formed owning to deformation of bars that results in generating lateral tension on concrete. This failure becomes evident when bar spacing, concrete cover or confinement is inadequate.

Splitting type failure of concrete beam is mostly found in general as compared to bond failure because of splitting. As a result of wedging action, ribs on bars tolerate against surrounding concrete.

Splitting happens in two directions. It may form in vertical plane or developed horizontally along the plane of reinforcing bars. Horizontal splitting is found extensively at a diagonal crack. Dowel action often enhances the possibility of splitting.

Hence, shear failure (diagonal cracking) and bond failures are interconnected but this relation is very complicated to explain. 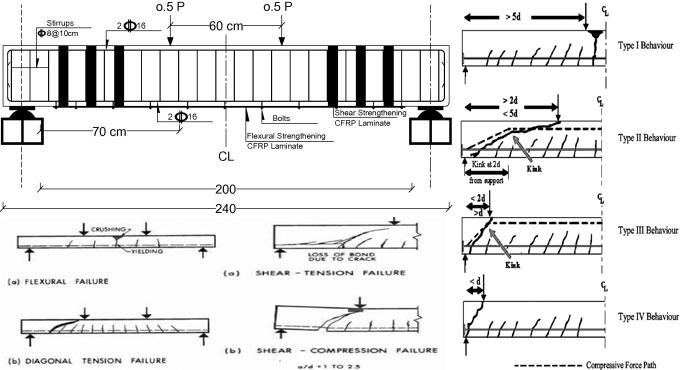