Repointing occurs whenever the mortar between two consecutive brick joints becomes empty. When this occurs, repointing should be done. A repointing job is intended to give the structure a more appealing appearance, as well as to keep water out of the house.

When is there as requirement for Brick reporting?

Brickwork is a kind of structure that is very open to the elements and needs some serious consideration. There must be some signs that the brickwork needs to be repointed, those are:

It is very important not to damage the bricks of your house as it will reduce the beauty of your house. You will then need to repair or repaint the mortar on the bricks that have been damaged. The damaged bricks must be replaced as soon as possible if they are too severely damaged.

This is a serious problem with brick repointing; incorrect repointing causes damage to the wall. Cement mortar contains more moisture, which weakens the brick mortar joint. Sometimes the entire building will be covered with ice, causing the upper face of the brick to crumble.

Efflorescence is a common problem with bricks. Because of the increased moisture content, certain white spots have appeared on the brick surface. If efflorescence-causing bricks are discovered, they must be replaced.

The surfaces of bricks must be thoroughly cleaned since the presence of dirt reduces the adhesion property of cement mortar. If there are certain challenges, the entire structure will not be robust enough. As a result, we must thoroughly clean the brick surface.

The presence of dampness is common, so it is important to inspect it properly and take the correct action as soon as possible. So, these are the symptoms that your bricks need to be repointed.

It is a fairly popular sort of pointing in which mortar is applied at the joint of two bricks and the margins are neatly and properly trimmed to keep the wall at the same level.

Trimming is done using a trowel and straight edge tools. Flush pointing may not have a pleasant aesthetic, but it helps protect the joints from dust, rain, and other elements.

Recessed pointing is another common style of brick pointing. In recessed pointing, the mortar is pushed 5 mm or more out from the edge of the brick joint.

It necessitates some well-trained labour, and the labour cost is likewise reasonable. Recessed pointing enhances the appearance of the home.

Beaded pointing is a sort of pointing in which iron or steel metal is used at the junction of two bricks.

Natural concavity exists in the steel part. Beaded pointing enhances the visual appearance of the house, but its lifespan is poor.

The fundamental advantage of striking pointing is that it drains rainwater quickly and effortlessly.

It is also a modified part of flushed pointing where a grooved is made by a special hand tool. This type of pointing provides a beautiful outlook.

A tuck point is a kind of groove point. Also in this case, we make a groove of 3mm in depth and 5mm in width. We will then fill it with cement mortar.

The V pointing process involves placing the mortar into a joint, and then completing the mortar's face with a V shape. 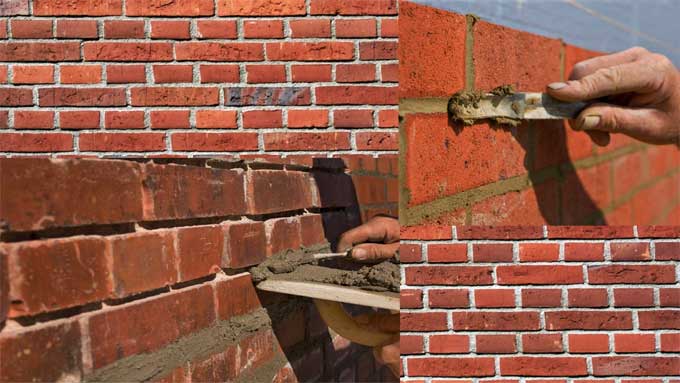