Constructions made of bricks are considered to be the world's oldest and most useful building material. It is imperative to determine the suitability and quality of bricks used in such constructions, considering their immense importance. So, to be sure the structure is strong and stable, several tests must be performed on brick. Various phases of construction require such tests on bricks.

1. Brick specimens are first dried in the ventilated oven between 105 and 115?C until they have a uniform mass.

2. A room-temperature cooling is then performed on the heated specimen.

3. M1 is the mass of the specimen, which has been weighed.

4. A 24-hour immersion in water at approximately 27 degrees Celsius is then performed.

5. A clean cloth is used to remove any traces of water that may be present on the brick specimen from the water.

6. As a result, M2 is obtained by weighing the specimen thus obtained.

7. Bricks are soaked in a series of steps following the following sequence.

8. Initially, the brick specimens are heated at 105?C to 115?C in a ventilated oven until they attain a constant mass.

9. A room-temperature cooling is then performed on the heated specimen.

10. M1 is the mass of the specimen, which has been weighed.

11. This is followed by 24 hours immersed in water at a temperature of about 27 degrees Celsius.

12. A clean cloth is used to wipe off any traces of water that are present on the brick specimen after it has been removed from the water. As a result, M2 is obtained by weighing the specimen thus obtained.

Masonry bricks are often subject to compressive forces, so it is necessary to determine their crushing strength. It is an important type of laboratory test performed on bricks.

Compressive strength is also known as crushing strength, which determines their load-carrying capacity as a result of a compressive load.

The bricks must be of uniform size and shape so that the construction will remain consistent. The edges of a brick should be sharp and rectangular. This test is conducted by taking 20 bricks from the stack of bricks. In addition to stacking the samples, the dimensions and heights compare.

Construction can be done with bricks of similar size if they are size-matched. They broke to determine if bricks are structurally sound. They observe clearly to determine whether the interior of the brick is homogeneous and if lumps are present.

Bricks with a high hardness generally resist scratching. An object sharp enough to scratch the brick used for this test. Bricks considered hard when scratching leaves no impression on them.

Salts should not be soluble in a good brick. Soluble salts found in bricks can result in efflorescence on the bricks, thereby decreasing brick quality.

A brick sample is immersed in water for 24 hours to determine if it has efflorescence when combined with water. A shaded environment is used to dry the specimen. An acceptable brick's uniform color throughout its body must be seen visually with this test.

When the specimen has dried completely, it examines thoroughly. In the presence of white or gray patches on a brick surface, soluble salts exist, which does not allow the brick to be used for construction. 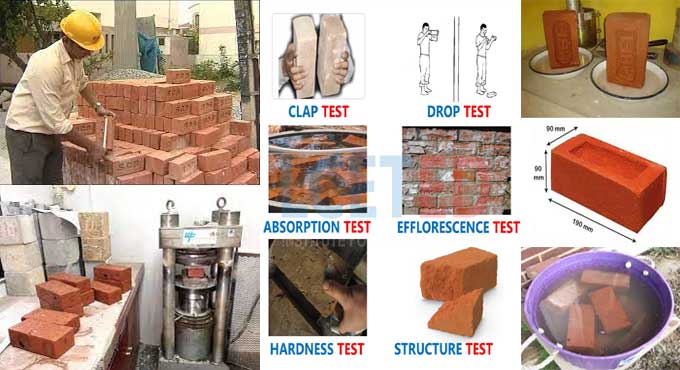