What is Bridge Abutment and what are its types?

The abutment is essential substituent information of a bridge. It is a vertical structure whose function is to distribute the weight and load of the bridge. The duration and life span of a bridge directly depend on the bridge abutment.

This is the area on a bridge connecting the ground surface with its deck. The load-bearing ability is directly connected with the formation of the bridge abutment. When a bridge is sanctioned to be built, the abutment is constructed placing vertically within the water or ground surface.

The abutment provides the vertical support from starting to the end, provides the path to build the roadways horizontally on these abutments.

The required number of abutments is determined by the length of the bridge. Usually, for small bridges two abutments are installed but according to the bridge’s length, the additional abutment can also be installed.

There are a few necessary structural components for the construction of an abutment:-

Bridge Seat: Top surface f the abutment, where the deck or horizontal surface is to be seated, is called bridge seat.

Wing Wall: This component can only be seen in an abutment when a bridge is connected with an embankment. Wing wall is a short wall additional component which is created to prevent the structure from soil erosion.

Pile of the Abutment: Pile is an attachment of the abutment that connects the ground soil to the bridge seat abutment. The length of the pile can be according to the height of the bridge structure.

The footing of the Abutment: This footing is the one component that connects the pile to the ground. This footing component of abutment can also be called, the foundation of the bridge structure.

The following are a few types of abutment:-

This kind of abutment is basically used to tackle tremendous earth and water loads with its huge weight. As the name suggests, the abutment of the structure is constructed simply on the ground. This kind of abutment makes the gravitational pull its key element for its durability.

Cantilever Abutment has two basic purposes, one is to hold the soil behind the two ends or prevent erosion. Secondly is to support the structure. Some of this Cantilever wall abutment is also known as stub abutment. This kind of Stub Abutment is generally made very short in height and placed approximately at the top of a horizontal roadway.

This Stub abutment can be very much cost-efficient but it generally increases the length of the superstructure.

This kind of abutment is usually used in congested and urban areas where the structural depth is necessary. It is basically a tall height abutment for low-level roadways which is constructed to support the entire structure.

This pile bent abutment is a type of abutment used to replace the wall-like support structure. This is basically a series of piles or columns to provide support to the structure. 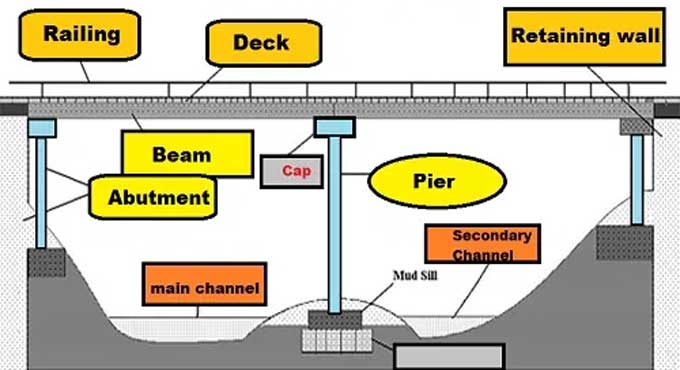