Calculation of buckling for pinned column

For the ideal pinned column, the critical buckling load is computed with Euler's formula:

Here:
E stands for Modulus of elasticity of the material
I stands for Minimum moment of inertia
L stands for Unsupported length of the column.

It should be remembered that irrespective of the end condition, the critical load is based not only on the material strength, but also on the flexural rigidity, EI. Buckling resistance is raised by enhancing the moment of inertia.

For columns containing several types of support, Euler's formula may is useful when the distance L is substituted with the distance among the zero moment points. See "Effective Length Constant Table" below.

This length is known as the effective length Le and is demonstrated with the following equation:

The slenderness ratio is a vital parameter in the classification of compression members, and is demonstrated with the following equation:

Here:
r stands for Radius of gyration
I stands for Moment of inertia
A stands for Area cross section

In short columns, failure may happen by compression devoid of major buckling and at stresses surpassing the proportional limit. For this condition, Johnson's formula will be used :

To calculate column buckling, use the following online calculator engineersedge.com 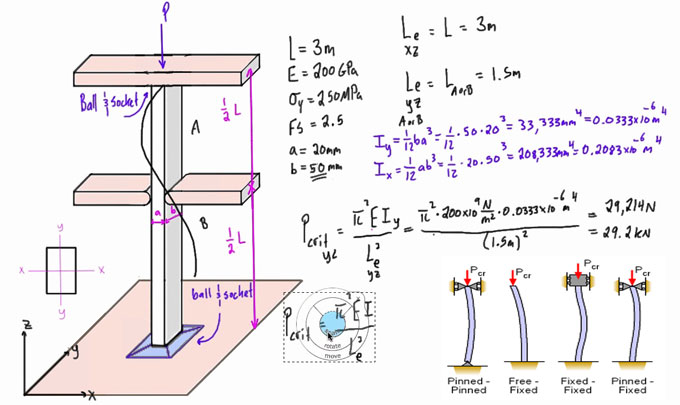