The foundation of the structure should be secured from the following factors :

The foundation systems should satisfy the following vital requirements:-

1. The primary requirement for any structure concerning its load resisting strength is that the structure should be built up in such a manner that the combined dead loads, live loads, horizontal loads like earthquake and wind load are defended, passed and transferred to the ground securely in spite of providing any any structural damage, deflection and distortion.

2. Foundation should be pushed deep into the ground in order that the structure is not influenced with ground movement like swelling, shrinking, freezing. The landslide also should not impact the strength of the building. The structure should be secured from any damage and distress.

3. Foundation base should be inflexible with the purpose of reducing the differential settlement, specifically in a situation when superimposed loads are not consistently dispersed over the foundation.

4. Foundation should be situated in such a manner that its performance remains unchanged because of any unanticipated future forces like earthquake and overloading.

5. The design of the foundations is created to withstand the ultimate loading cases combination against overturning and sliding.

6. Foundation should protect from chemical attack in soil. Groundwater and soil may include several types of chemicals injurious to the foundation concrete, the most aggressive one is sulphates. Sulphate attack can normally be alleviated with sulphate resisting cement. Still proper precaution should be at the time of placing the concrete, by vibrating and curing.

7. Foundation should be taken deep enough to withstand the overturning, despite the fact that the bearing strength of the soil is good at adequate depth. Due to adequate depth, swelling can?t occur. 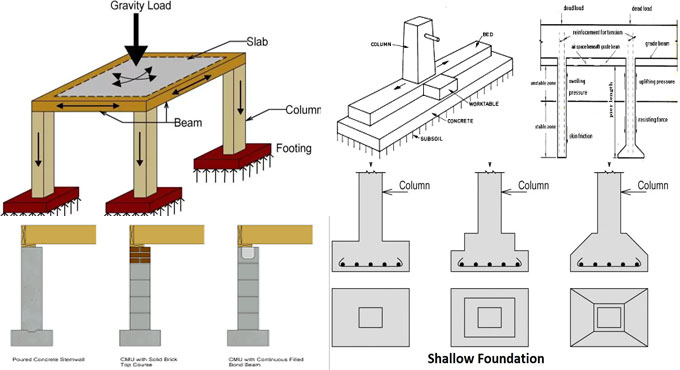