Definition of building substructure and its constituents

The primary constituents of a building substructure belong to the foundation and plinth beam. These components securely transmits the load from the superstructure to the ground.

Foundation: The foundation means the structure situated under the ground level that gets in touch with the superstructure directly. The foundation transmits the dead loads, live loads and all other loads operating on it to the foundational soil.

The construction process of foundation is done in such a manner that the soil over which it stands is stressed inside its safe bearing strength. Any failure of foundation leads to the failure of the building structure.

1. Strip Foundation: Strip foundation or strip footing offers support for linear structures like a wall or tightly spanned column, in the shape of strips. It is suitable for the soils having strong bearing strength as well as ability to support light structural loading. The size and location of the strip foundation are based on the width of the wall.

2. Raft Foundation: Raft foundation is also known as a mat foundation. It expands over the total building area and combats severe structural loads.

A raft foundation transmits the total load from the building area to the total floor area. As a result, the stress operating on the soil is significantly decreased that results in lessening the scope for shear failure of soil.

3. Pile Foundation: Pile Foundation stands for a type of deep foundation that transmits heavy loads from the superstructure to hard strata underneath the ground. Pile in a pile foundation refers to a deep reinforced concrete column that meets the hard rock strata far below the ground.

Plinth Beam: Plinth beam belongs to a beam that is developed in the plinth level among the wall and the foundation.

The purpose of this type of reinforced concrete beam is to resist the circulation of cracks from the foundation to the walls.

A plinth beam can allocate the load uniformly from the walls to the foundation. These are essential for construction projects planned in the areas susceptible to earthquake. 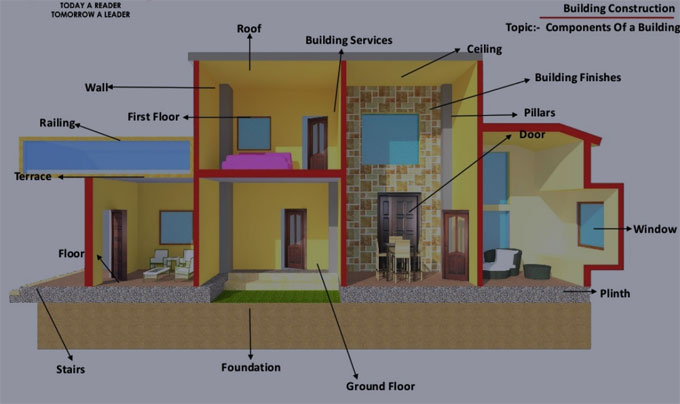