How to calculate hinged support, normal thrust and shear of a three hinged circular arch

This construction video tutorial is based structural analysis. You will learn how to make calculation of reaction at the support as well as normal thrust and shear for three hinged circular arch.

This video is presented by renowned engineer Mr. Parag Pal.

a. A three hinged system comprises of two plates, attached collectively with a hinge containing two hinged supports A and B resting on the ground.
b. When the plates 1 and 2 comprises of curved bars, the system is known as a three-hinged arch.
c. The distance 1 among the centers of the hinges at the support is known as the span of arch.
d. When distance f from the center of the crown hinge to the straight line going through the former two is defined as its rise.

The reactions of a three hinged arch will be completely established with four parameters, as for example, the amounts of reaction Ha, Hb, Va, and Vb.

So, a three hinged system is always statically determinate.

a. The bending moments and shears operative over cross sections of three hinged arches are significantly smaller as compared to the subsequent stresses in a simple beam covering the equivalent span and bearing the same load. So, three hinged arches are inexpensive relating to ordinary beams, specifically for large span structures.

b. Calculations are very simple as compared to other type of arches.
c. No bending moments are generated at the abutments and the crown since hinges cannot withstand moments.
d. Differential settlements of the supports do not impact stresses, since the pines or hinges allow the arch to assume the slightly different shape consequent upon settlement.

e. The pin joints allow the arch to modify itself to expansions and contractions because of alterations in temperature.

In this video, solution is given to the following problem: A three-hinged circular arch hinged at the springing and crown points contain a span of 40 m and a central rise of 8 m. It bears a consistently distributed load 20 kN/m over the left-half of the span collectively along with a concentrated load of 100 kN at the right quarter span point.

Determine the supports, normal thrust and shear at a section 10 m from left support.

To get the solution, go through the following video tutorial. 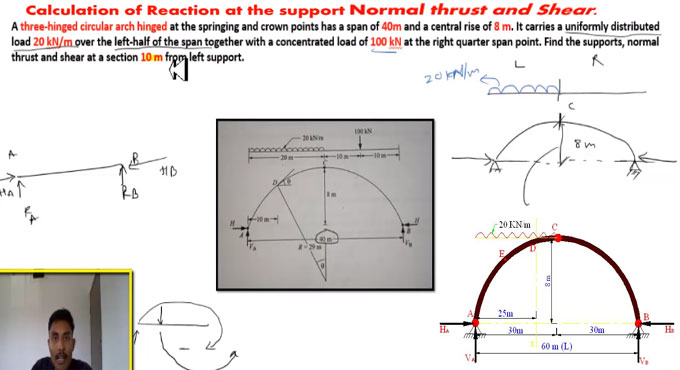