What Causes Foundation Heave is and how it is solved effectively?

When the soil expands due to prolonged saturation, the foundation is heaved upward. The soil beneath a foundation can become saturated due to seasonal changes in moisture, leaks in underground pipes, or underground aquifers.

Lots of people around the world losses more money due to heaving than it does due to tornadoes, hurricanes, floods, or earthquakes combined.

Wet and expansive soils work very hard to lift your home during this process. According to your home's design, it is built for permanent residence. It happens when a relatively unstoppable force meets a very movable object.

When soil moves up, the foundation moves in an uneven fashion, causing stress and pressure on the wooden house bones hidden behind drywall and or tiles. As annoying as these signs and symptoms can be, they can also impede the functionality of your home and have an adverse effect on your quality of life.

1. When large trees are removed from a construction site, the soil moisture is likely to increase because the trees' roots previously drained the soil.

2. Consequently, the soil moisture under the foundation is increased as a result of reduced natural evaporation of moisture in the area covered by the structure.

3. Soil moisture is also increased in the area occupied by the structure due to a reduction in transpiration from vegetation.

4. When the source of moisture depletion is eliminated, the soil mass accumulates and has more moisture.

5. Insufficient drainage prevents surface water from draining from the structure, resulting in ponding and an increase in moisture.

6. Rain gutters and downspouts formed around a structure can create ponds, which lead to increased soil moisture due to the water finding its way toward the foundation. As a consequence, foundation heave may occur since clay soil expands.

7. During excavations for basements or shaft foundations, and at soil-foundation interfaces, seepage into the soil beneath the foundation increases soil moisture.

8. Water saturates the soil beneath a foundation when an aquifer is tapped, causing it to expand and generate pressure.

9. Foundation heaving is more likely to occur when exposed foundation soil is dried in excavations and the soil surcharge weight is reduced.

The shrinkage of soil under heated sections of a foundation, such as furnace rooms, occurs as a result of soil drying. This results in foundation settlement, which can be problematic for the serviceability and, to a great extent, safety of the structure.

Whenever underground water and sewer lines leak, clay soil around these utilities becomes saturated, causing foundation heave. Cyclic edge heave can be exacerbated by planting and growing trees within one to one 7 half times their mature height from structures. Soil moisture can be increased by lawn water.

A structure's foundation heave can be caused by environmental conditions. The edge of a structure can move upward due to dramatic climatic changes, such as long droughts and heavy rains.

Soil swelling occurs when the water table changes, changing the soil's moisture. The soil beneath the foundation expands due to frost heave and chemical reactions such as oxidation of iron pyrite, creating pressure against it.

How to fix Foundation Heave

If you want to protect your home against foundational heave, Helical Piers are the best option. Because the helical piers are locked together, your home will not settle or rise.

Your house will remain stable with helical piers. The earth may lift even with the helical piers in place, making the heave worse because something has to give, and it will be your home's foundation.

Buildings that are lighter with thinner foundations are more likely to experience foundation heave than those with thicker foundations. A concrete foundation can be pressured by soil up to 260 KN/m2. 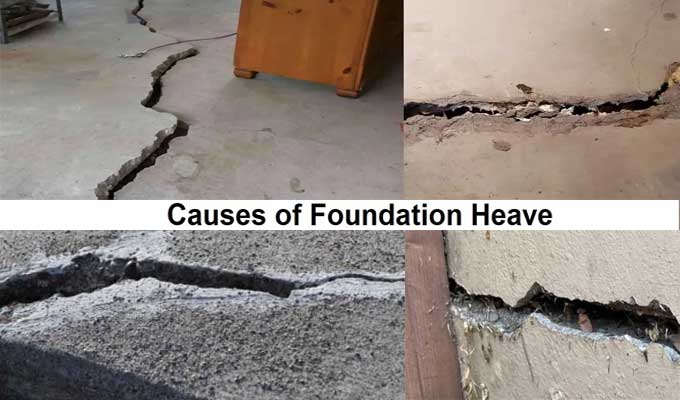