In this civil engineering article, you will get detail information on the most common methods for developing a concrete structure.

Designing the concrete mix: The most vital part in the method is to find out the components that will form the concrete and their ratios. Several types of variables should be taken into consideration at the time of designing which range from cement type, aggregate size and type, amount of water, and mineral and chemical admixtures.

A good mix design can also lead to improper or substandard quality concrete when it is accomplished inappropriately. Based on the type of project, it is decided who will take responsibility for designing the mix. For large, publicly funded projects, a licensed civil engineer should be liable for the final design.

For residential projects like foundations and driveways it is the private contractor, who will prepare the mix design. For do-it-yourself projects it is of course the homeowner who should take responsibility to design his own mix.

To produce an exact mix design, initially, detect the properties that the fresh and solidified concrete should have and then move backwards to opt for the most inexpensive mix design that provides these properties.

Here, focus should be given on the following factors :

Supported Loads: Concrete is formed with different types of strengths, so this is considered as the gateway of the mix design. As the cost of concrete scales rather narrowly with its strength, one does not like to make the concrete stronger than it should have been.

However, if the application provides support to considerably small loads, it is generally not a good idea to indicate weak concrete since weak concrete does not have good stability. For low load applications the quality of the concrete is settled with other factors like resistance to freezing or wear resistance.

Workability: The necessary workability is mainly based on how the concrete will be arranged. Concrete can be poured, pumped, and even sprayed into place, and it will impact the desired workability. Various other factors like the shape of the molds, the rebar spacing, and the accessible equipment at the site for solidifying the fresh concrete once it is placed should also be taken into consideration.

Workability is generally settled with the slump, the tendency for the fresh concrete is to expand under its own weight when it is arranged onto a flat surface.

Environmental conditions: When the concrete is uncovered to severe conditions, then this may perfectly ascertain the required concrete quality in spite of the applied loads. In cold-weather locations the concrete should have the strong resistance capacity against freezing. Besides, it must have the ability to resist the corrosive effects of salt. Underground applications should have the capability to withstand the penetration of moisture and aggressive species from the soil. For almost any type of conditions or mode of attack, the most effective way for defense is to retain the w/c low.

Surface wear: For some applications the physical loads can erode the concrete rather than breaking it. For roads, parking garages, driveways, and industrial floors, the longevity of the structure depends on the hardness and wear resistance of the top layer of concrete. 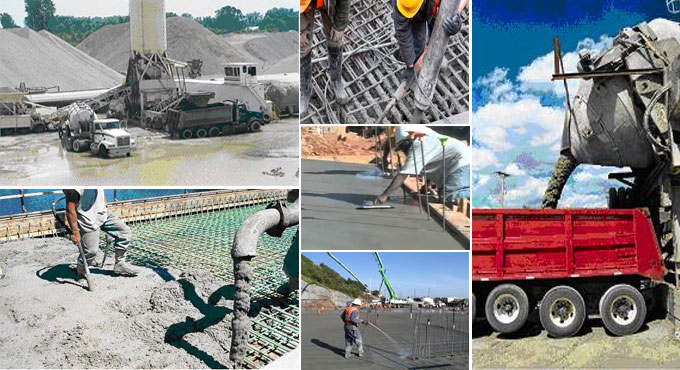