The curing of concrete is the last and one of the most important activities required to be taken in the process of concrete construction. This last step plays a very significant role in the concrete performance and needs the full and minute attention of the persons involved in construction and those involved with quality assurance.

Curing is the procedure used for accelerating the hydration of cement and consists of control of temperature and of the moisture movement from and into the concrete. Early in the hardening process, after placing the appropriate mix, curing in a suitable environment is important for the development of good concrete properties.

The chemical process of hydration cannot be finished without adequate curing. Please note that without appropriate curing, you will never be able to achieve the concrete's intended strength. This loss of strength lasts a lifetime, and there is no simple way to reinforce such inadequately cured weak concrete. As a result, take care when treating patients.

What is the recommended curing time for concrete?

The most crucial part of the concrete curing process is continuing to hydrate the cement with water until the concrete reaches its maximum compressive strength. The concrete's hydration process is ongoing. Rarely does cement ever get fully hydrated, and as a result, the full benefits of cement's overall strength are never realized.

It's crucial that adequate water be held inside the mass of fresh concrete during this time since cement hydration is more rapid during the first few days following placement. Either minimizing evaporation losses or refilling the water continually on concrete surfaces for a sufficient amount of time can achieve this.

Concrete has to be cared for in its early years much like a newborn infant does. If concrete is not properly cared for by performing the necessary curing or shielded from the wind and harsh environmental conditions, the structure will lose its strength, durability, and performance will be much lower than what is necessary. In other words, it will act weakly from birth.

As a result, you will have to endure poor performance from your concrete for the remainder of its life if you do not cure it adequately. The structure you have for your life is practically lost to you.

In essence, steam curing is the process of curing water vapor at atmospheric pressure or greater. When an early strength increase is necessary and heat is required for hydration, such as in cold weather, it is employed.

To reduce heat losses and moisture, steam curing at normal pressure is often performed in an enclosure. A lot of times, tarpaulins are utilized to create enclosed areas.

After the final installation of concrete, the application of steam to the enclosure should be postponed for at least 3 hours or until it has properly hardened. The maximal early strength will be attained 3 to 5 hours before steaming.

As long as the necessary concrete strength has not yet evolved, the steam temperature in the enclosure should be maintained at roughly 60°C. The maximum steam temperature will not greatly increase if it is increased from 60°C to 70°C.

They might harm and are not cost-effective. To prevent heat-induced delayed expansion and unwarranted loss in ultimate strength, it is advised that the interior temperature of concrete not exceed 70°C.

Therefore, to avoid detrimental volume fluctuations, high rates of heating and cooling should be avoided. Depending on the size and shape of the concrete part, temperature changes in the enclosure around it shouldn't be more than 70°F to 90°F per hour.

Until the concrete reaches the necessary strength, the curing temperature in the container should be kept constant. The amount of time needed will depend on the temperature of the steam and concrete in the enclosure.

For the concrete to reach its full strength and other properties including durability, volume stability, water tightness, and abrasion resistance, it must be properly cured in the first few days following placement.

A proper cure also minimizes concrete surface cracking brought on by inadequate binding as a result of water shortage. When early high strength is required and it is chilly outside, atmospheric pressure steam curing is used. 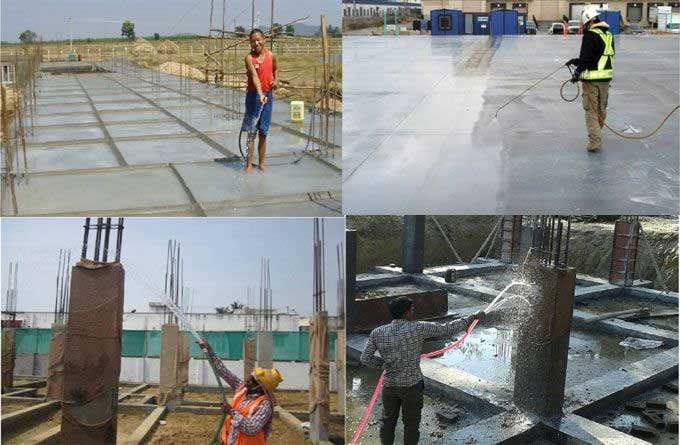