RCC contains steel bars. RCC stands for reinforced cement concrete. Concrete can easily be made at the construction site. concrete is also very strong in compression and steel is very strong in tension.

Making the Process of Reinforced Concrete

1. Users first have to make a mold. The mold is called formwork. Formwork contains liquid concrete which gives the required shape.

2. After that, according to the structural engineer's drawings, users have to place it in the steel reinforcement bars. Users should tie them with the wire. The tied steel is called a reinforcement cage because of its shape.

3. After placing the steel now users have to mix the cement, sand, stone chips in and water in a cement mixer for preparing the concrete.

4. After that users have to pour it into the formwork to the required level. Concrete takes nearly one month to gain full strength. In meanwhile users have to supply water on the surface for curing.

The whole process is called concrete mix design. A site engineer will order a different type of mix for a different purpose. But in most cases, a standard mix is used. Common examples of standard mixes are M20, M30, M40 concrete.

Here the number means the strength of the concrete in n/mm2 or newtons per square millimeter. Therefore M30 concrete will have a compressive strength of 30 n/mm2.

The downwards force on the building comes from the expected weight of the other elements like furniture, books, etc. The loads are specified in building codes. structural engineers design buildings so that the buildings bear the whole loads.

This type of load is very common for bridges and similar infrastructure. Traffic mainly creates these loads including braking and accelerating loads.

A building is designed so that it can resist a wind force of 150 kg/m2. This is a very significant force when multiplied by the surface area of the building.

When an earthquake happens then the ground vigorously shakes the building both horizontally and vertically. For this reason, a building may fall. So the engineers make the building in a particular way so that the building does not fall apart.

Some other important components of concrete frame structures are Shear Walls and Elevator Shafts.

Shear Wall: This is a very important component for a high-rise building. This prevents the horizontal forces on buildings like wind and earthquake loads. Shear walls can carry vertical loads.

The shear wall only works for horizontal loads in one direction - the axis of the long dimension of the wall. So shear walls are usually not required in low-rise structures.

Elevator Shafts: These are vertical boxes in which the elevators move up and down.

Now readers can understand this by reading this article. If viewers think this article is really helpful for them then please let us know your valuable opinion.

Readers can submit their valuable comments in the comment box below the article. We are very eager to know. 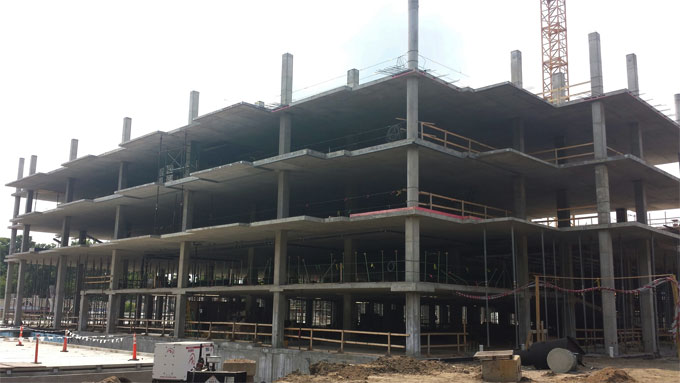