Know about Pedestal, its types, various benefits, and drawbacks

There are a number of different definitions for the term pedestal in the Civil Engineering field. However, in this context, it can be defined as a compressive structural member that is placed between the footings and the columns in order to provide uniform load distribution within each of them.

Here are a few of the objectives of Pedestals:-

1. Designed to carry loads between footings below the ground and supported elements like columns, statues, etc., a concrete pedestal carries these loads.
2. The metal columns generally have this feature below them. Pedestals are generally wider than they are tall.
3. There is a possibility that the column section could contact the subsoil beneath the Wood or Metal columns.
4. A column section may suffer from corrosion or decay if poor quality soil, soils near the water table, or soils infested with sulfates are present.
5. The column section will have very few chances of contacting the subsoil earth if the pedestal is provided.
6. An appropriate design of the footing may result in the footing thickness becoming very thin.
7. It is possible for the footing to fail structurally and for the column to buckle if a long, thick support element is placed on a thin footing.
8. In soils with low bearing capacities, it is possible to provide footings with required bearing capacities that are wide.

Different types of Pedestals and their respective Benefits

Below mentioned a few types of pedestals:-

In construction, a concrete pedestal is an element used to support columns, statues, etc., and support them under footings below ground level. Pedestals for columns are placed below the column, and the length of the member in the pedestal is not more than 3 times the size of the least lateral dimension of the column.

1. By placing columns on pedestals, the height of columns is reduced, which reduces the likelihood of them buckling.
2. It also reduces the amount of reinforcement required to maintain the column's structural stability, since the pedestal increases its elevation.

There are pedestals for columns to support them. These pedestals need to have a maximum length of 3 times the width of the least lateral dimension of the column, and they need to be placed below the column itself. In this case, it is not more than three times the lateral dimension of the footing pedestal that is less than three times its length. As modern building construction evolves, footing pedestals are becoming a more and more popular option.

1. It is necessary to have wider footings with estimated bearing capacity when the soil bearing capacity is low.
2. By distributing heavy loads evenly over the footing surface, pedestals prevent heavy concentrated loads from being applied directly to the footing.

The construction of foundations is incomplete without the use of footings. Typically, they are constructed of concrete and reinforced with rebar and are often poured into a trench that has been excavated after a trench has been dug. There is a purpose for footings; their purpose is to support the foundation and prevent the foundation from settling down.

1. In the construction of the pedestal, concrete is a very strong material that should be used as a component of the construction.
2. It is highly durable, making it a great material for building a pedestal that will last for many years to come.

Drawbacks of Pedestals in Construction

Below mentioned a few drawbacks of having a pedestal in a structure:-

1. This is because the footing of the column is below ground, so placing the steel of the column in the footing would not be a safe option since the footing is the ground.
2. In terms of the disadvantages of the pedestal, the only disadvantage is that the pedestal needs additional reinforcement to be fixed, and more concrete has to be used to construct the pedestal, which is a downside of the pedestal.
3. Consequently, it will increase the cost of the project, which isn't very suitable for places where financial implications are prevalent because it increases the cost. 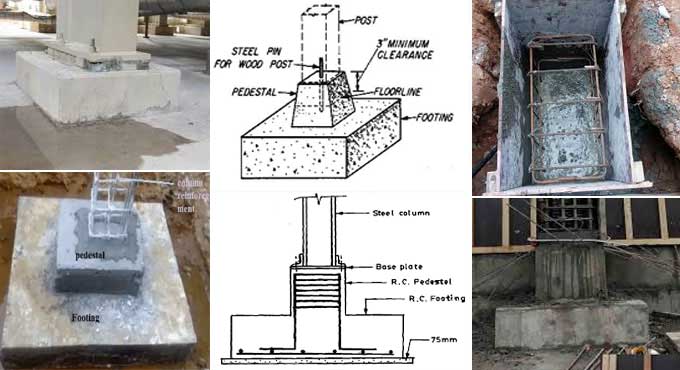