If you see a crack in a structured building column, the finite chances are they (cracks) were occurred in the post construction phase.

The basic reason for it would be the excessive amount of stress developed by the strength of the building components. As of for this, the external forced applied by the components are the sole reason for this excessive stress.

How would you distinguish the intricating forms of cracks with respect to nature, width and shape?

We will summarize the basics of few of the major Cracks that take places when a concrete column is reinforced. None the less, we shall see the probable factors that cause these cracks and what exactly their important phenomena are.

As you can see in the following figure, that the concrete column in which the wire mesh or steel bars are embedded to increase its tensile strength, is basically failing to fulfill its purpose of carrying the load due to either the inadequate numbers or the poor/comparatively inferior quality of the concrete bars.

As a result the load carrying capacity of these bars reaches up to its maximum level and is unable to bear anymore. Hence these sorts of cracks occur.

As you can follow in the figure bellow that these cracks take place in the column due to the inadequately made cross-sections and insufficient numbers of reinforcement steel bars which are probably hastily formed due to negligence or lack of times.

The first left diagram tells us about how the diagonal cracks are formed in the end column due to the insufficient load or strength enduring capacity. 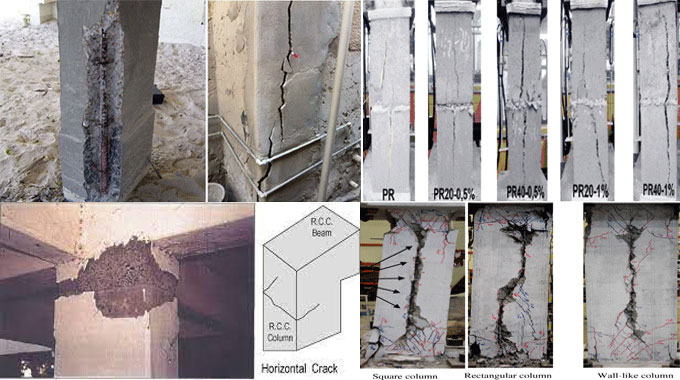