Know everything about Concrete Creeping

Concrete creep can be defined as the deformation of concrete due to continuous loads that cause the material to become elastic over time. The shape of a concrete structure is usually changed by long-term pressure, and the deformation takes place along the direction of the applied load, which occurs as the load is applied. Immediately after removing the constant load, the strain is immediately reduced as a result of the reduction in strain.

The reduction in the strain at the specified age is the same as the diminution in the elastic strain at the same age. Once the concrete has recovered from this quick deterioration of strain, a continuous decrease in strain is observed, which is known as creep recovery.

A linear relationship between concrete creep and stress has been found up to 30 to 40% of its strength. In contrast to other crystalline materials, concrete exhibits a much greater amount of creep than metals in the last stages of yielding before the collapse. Therefore, creep is an important factor to consider in concrete building construction, since it is several times greater than strain under loading.

The creep of concrete is affected by a number of factors, including:-

Aggregate has a creep rate of less than one percent. Among the factors that influence the creep of concrete is the aggregate since it has the ability to restrain the magnitude of creep.

The quantity and quality of paste material are the two most critical factors that determine creep in the paste. If the proportion of water to cement is too high, then the concrete will develop excessive creeps, which in turn will result in a decrease in strength over time.

When the load is applied to a concrete structure, the type of cement effect will have an impact on the concrete's strength. The fineness of cement can have a significant effect on the development of strength and, as a consequence, creep in concrete.

In the laboratory, a finer cement will require a greater amount of gypsum. This is due to the fact that regrinding cement without gypsum results in improperly retarded cement that will creep significantly when cured.

There are two potential effects of the concrete's temperature on its anti-creep properties. Concrete members are strengthened and creep strain is decreased when they are subjected to a higher temperature during the curing process before they are loaded. In contrast, creep may be caused by high temperatures during the loading period.

A concrete surface that is soaked up by moisture is affected by the amount of humidity in the air which makes the concrete wet. The rate at which moisture is lost decreases as humidity levels rise.

It reduces the amount of seepage that occurs. Therefore, with regard to a particular concrete's creep rate, the lower the relative humidity, the greater the creep rate will be.

Various effects of creep in concrete

1. There is a significant effect of creep on the deflection of reinforced concrete beams over time, which may be one of the key design parameters.

2. Columns loaded eccentrically can buckle due to creep, which increases deflection.

3. Depending on the construction and the connection between the columns and beams, creep may be used to reduce stress concentrations due to shrinkage or temperature changes or to provide support for the movement. This property of creep will be beneficial to all concrete constructions in order to reduce internal stresses that are caused by non-uniform loads or constrained shrinkage of the concrete in the future.

4. Due to the huge temperature difference between the inside and outside surfaces of a mass concrete structure like a dam, creep can damage the structure and may lead to cracking in the interior due to the significant temperature difference. Consequently, it is important to ensure that all precautions and actions are taken on the inside of a mass concrete construction in order to ensure that there is no increase in temperature in the interior of such a structure. 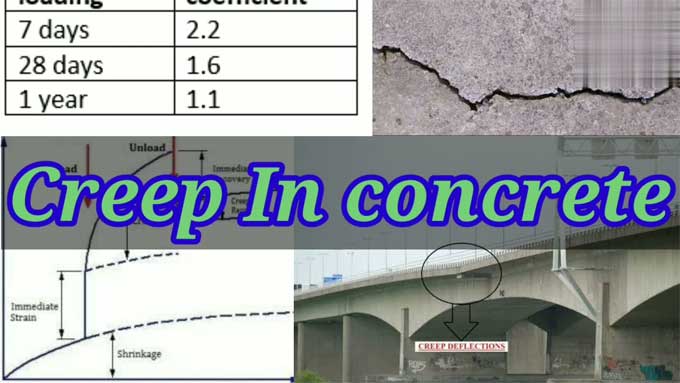