Computers and Structures, Inc. is the developer of CSiBridge. It is a very useful software for integrated 3d bridge analysis.

Modeling, analysis and design of bridge structures are incorporated into CSiBridge to transform the bridge design process to the next level.

The engineers can apply CSiBridge to easily determine complicated bridge geometries, boundary conditions and load cases. The bridge models are described parametrically with the jargons which are common to bridge engineers like layout lines, spans, bearings, abutments, bents, hinges and post-tensioning. The software has the capability to generate spine, shell or solid object models which are automatically updated with the modification in the bridge definition parameters.

With CSiBridge design, it becomes easier to design and retrofitting of steel and concrete bridges rapidly without any difficulty. By using the parametric modeler, the users get the ability to develop simple or complicated bridge models as well as create rectifications competently and at the same time total control on the design progression. Lanes and vehicles are described rapidly and comprise of width effects.

With the use of simple and practical Gantt charts, it is possible to simulate modeling of construction sequences and scheduling.

There is a simple wizard method in CSiBridge that offers the useful process to generate a bridge model.

CSiBridge is supported with the SAPFire? analysis engine along with staged construction, creep and shrinkage analysis, cable tensioning to target forces, camber and shape finding, geometric nonlinearity (P-delta and large displacements), material nonlinearity (superstructure, bearings, substructure and soil supports), buckling and static and dynamic analysis. All of these can be used with a single comprehensive model. Besides, AASHTO LRFD design is contained with automated load combinations, superstructure design and the newest seismic design. 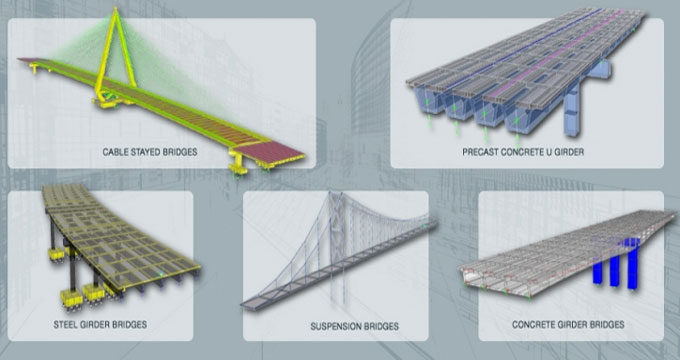