Density is defined as mass per unit of substance volume of a substance i.e. unit weight of that respective substance. Line (p) denotes as symbolic form of Density .It describes as material compactness that means the higher the density of substance more compacted the material is.

1. Concrete density has increased its strength and durability. By doing this process density of cement has got least concern.

2. Cement act as binder in a concrete, knowing its density will be very useful to change the concrete characteristics. The standard density of Cement has 1440kg/m3.

Inert granular materials of non metallic substances such as sand, gravel, or crushed stone clusters in to Aggregates. Concrete obtained in the particles form and processed with water and Portland cement. It has two types, there are fine aggregate and coarse aggregate.

Fine Aggregate: It is basically natural sand, washing and sieving processes have done to remove unwanted size particles. All particles above 5mm knows as good quality of fine aggregates.

Coarse Sggregate: It is a type of gravel that is crushed, washed, and sieved to a different size from 5 to 50mm.

Aggregate bulk density explains as Mass or Weight of the selected aggregate with a container filled with volume of specific unit.

What are Fine Aggregate Density and its range?

It is ranging between 1450kg/m3 to 2082 kg/m3 depending on different conditions.

What are Coarse Aggregate Density and its range?

What is Cement Density?

Cement Density is 2.8 gram per cubic centimeter or 1440 kg per cubic meter.

What is Density of Sand?

The approximate bulk density of fine aggregate makes concrete is between 1520kg/m3 to 1680kg/m3.

Define the Density of Crushed Sand and uses?

Partial replacement of fine aggregate in construction uses Crushed Sand. The density of M or crush sand is 1750kg/m3.

What is the range of concrete for Coarse Aggregate Density?

The Coarse Aggregate Density used in concrete that lies between 2400kg/m3 to 2900kg/m3.

The Concrete Density varies around 2400 kg per cubic meter.

What is Density of Concrete Kn/m3 in unreinforced concrete??

The Density of concrete is about 2400 Kn/m3 for unreinforced concrete.

Density of Concrete per Cubic Foot

The density of normal concrete is about 145 lbs per cubic foot.

Density of River Sand in kg/m3 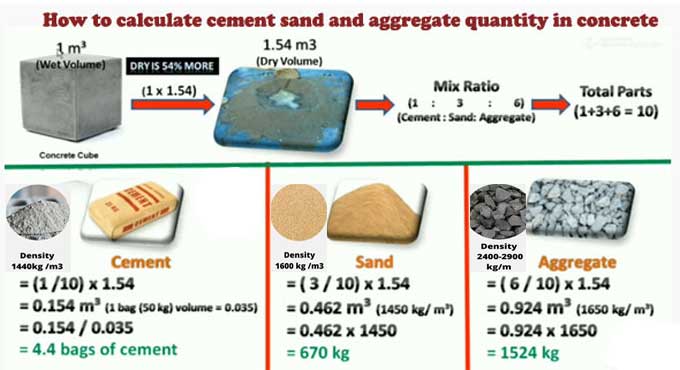