The use of trusses is the most widespread alternative for roof construction in Nigeria. The primary choice of material for it is timber and steel.

The best part about truss roof is that by using the truss web the ducts and pipes that are needed to be installed can be done so by using it. Even though, it is important to pay careful attention to the design of the truss member and their connections and failure in building a proper one can lead to the loss of life and also economy.

On the 10th of December, 2016 the roof of a church building in Uyo, Akwa Ibom State, Nigeria collapsed leaving 60 worshippers dead and many injured. Its incident shows how important it is for engineers to pay careful attention to the design situations.

A system of triangulated members that are connected and designed to carry load is called a truss. Inherently, a truss is stable in its shape and can resist load by developing primary axial forces which in nature can be tensile or compressive.

It is always assumed that the connections of trusses are nominally pinned as a very stiff connection in truss can lead to secondary effects such as bending moments and shear force which are induced in the truss members.

The ratio of span to truss depth should be within a range of 10 to 15 for a good structural performance of roof trusses. Even though, it must be considered that the architectural design of the building ultimately determines the already existing geometry and that is what governs the slope that is given to the top chord of the truss.

A number of buckling models are to be considered for the designing of a compression member in a roof truss.

Nodal spacing that is present in the truss: 1.2 m

Category of the roof = Category H- Roof which is not accessible for final maintenance and repair Imposed load on roof (qk)= 0.75 kN/m2 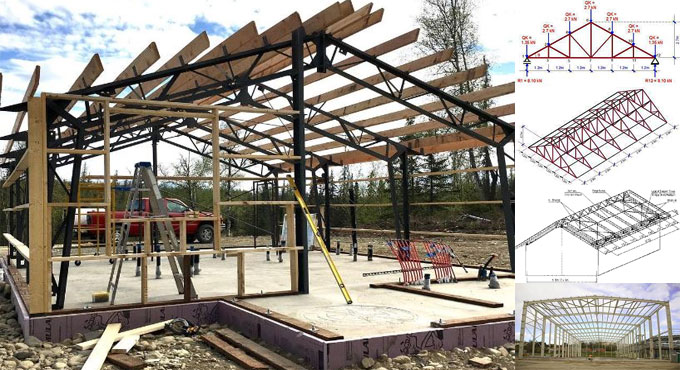