How to design the reinforced concrete wall

Load from slab is transmitted as axial load to wall. When depth is greater, it is known as RC wall. Design is identical to a RC column, breadth is similar to the density of wall and depth is equivalent to 1m. The design of RCC Wall is based on the following factors.
• Axially loaded wall
• Axially loaded with uniaxial bending

Under plain concrete wall, the reinforcement included is under 0.4% of c/s. In reinforced concrete wall, the proportion of employed steel is in excess of 0.4% and is designed in the same way as reinforced concrete columns. Slenderness ratio is equivalent to minimum of (l/t or h/t), where, l denotes effective length of wall, h stands for effective height of wall, t stands for thickness of wall. When < 12, the wall becomes short and if > 12, the wall becomes slender.

Braced: If cross walls are arranged for the walls so as to they can bear lateral load and 2.5% of vertical load, then the wall is defined as braced. If not, the wall is called as unbraced wall.

Note: Other walls under special cases are,
i) Cantilever wall
ii) Shear walls – To withstand lateral loads [Handle flexure created because of lateral loading on the structure, depth is allowed along the transverse direction]

To learn the detail process, watch the following link theconstructor.orgn 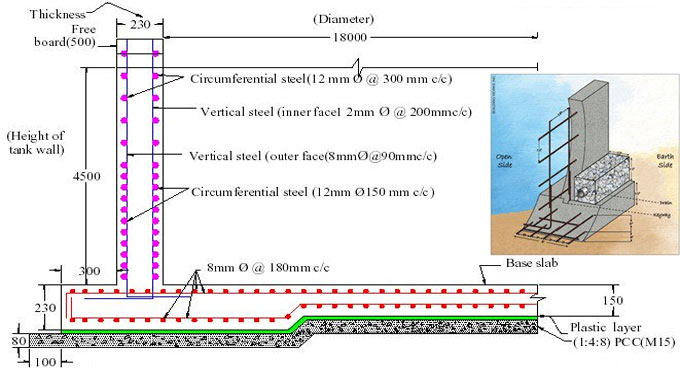