The Difference Between Strip Footings and Pad Footings

A structural engineer can help you determine which foundations you can use to support a wall structure. One incorrect decision could lead to disastrous results.

These foundations consist of Pads. When the soil and ground are appropriate, pad footings can go much deeper. While they serve the same purpose as strip footings, they stand out instantly from them. Pad footings are different structurally from strips in that they do not consist of strips. Wind and uplift are usually their biggest downfalls.

Concrete beams are made of rectangular, square, or circular shapes that support single-point loads, including structural columns, frames, and beams. A single-point load intends to sustain concentrated loads, so the support method differs from the counterpart strip footing.

In most cases, pad footings will have a constant thickness regardless of whether the upper surface is sloping. Ensure the thickness of the ground layers is sufficient for bearing the loads and supporting the shape of the plan.

Pad footings are also a good choice for ground beam support. In most cases, except those with the smallest volumes, the pads can be reinforced to reduce excavation needs.

Pad footings are suitable for a variety of layouts because of their formation. Some projects may require continuous or balanced pads, while others may require well-separated pads.

Strip footing, also called strip foundation, is shallow foundation types that usually have a foundation level of fewer than 3 meters above the surface. The formation is in a linear pattern that serves to distribute the weight over the entire soil surface.

All soil types can benefit from this option as long as they possess a suitable bearing capacity. Strip footings, therefore, can provide continuous support for linear structures such as load-bearing walls, which are typically level but can also step.

Strip footings are generally sized and placed according to the width of a wall structure.

There will typically be an overlap between the depth of the strip and the width of the wall.

That provides a 45-degree angle between the base of the wall and the soil, where the footing width strip is often three times the width of the supporting wall. It is important for strip footings to be deep enough to prevent frost, while when working with softer soils, the width may need to increase.

Strip foundations are often the best choice when supporting a linear wall by spreading stress points. In the case of closely-spaced columns, strip footings are preferable to pad footings because of their rendering. Additionally, strip footings consider a better option for low-to-medium-rise buildings with light loads, since they can serve as mass concrete foundations.

According to most definitions, shallow foundations are those with a founding level less than 3m from the ground surface. A shallow foundation sits on top of a surface load or condition that could affect the bearing capacity of the surface.

Pad foundations support a concentrated load from a single point load, such as columns. Strip foundations provide support for loads such as bearing walls.

In the case of closely spaced columns, a strip foundation would be better. Any construction site would not be complete without foundations, so it's important to understand the different options that you have available before making a decision. 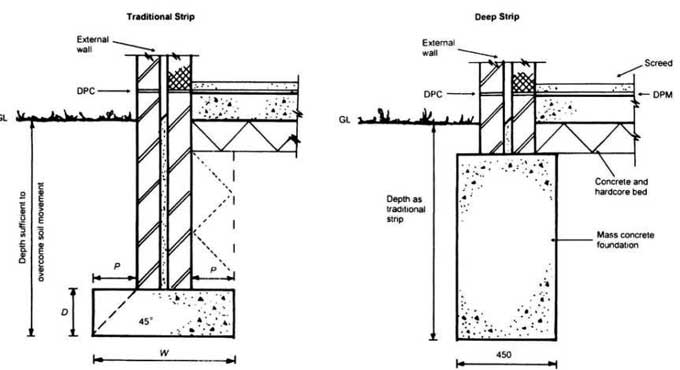