It is known that a beam comprises of two components i.e. reinforcement and concrete.

Balanced Beam Section: If the ratio of steel to concrete in a section prevails in such a manner that the strain in steel and strain in concrete attain their maximum values all at once, the section is identified as a balanced or critical section and the percentage of steel in this section is defined as critical steel percentage.

The section undertakes large rotational deformations from the preliminary phase of yielding of steel to the final stage of crushing of concrete, providing adequate warning of impending failure.

Given below, an extensive lists of different types of basic geometry formulas :-

Yielding of steel in under-reinforced beam section does not signify that the structure has failed, because if steel yields, extreme deflection and cracking in beam will happen prior to failure which provides sufficient time to occupants to escape ahead of the section fails.

Over-Reinforced Beam Sections: Reinforced concrete beam sections, in which the failure strain in concrete is attained sooner than the yield strain of steel is obtained, are known as over-reinforced beam sections.

If over-reinforced beam is designed and loaded to complete strength then the steel in tension zone will not yield much prior to the concrete attains its ultimate strain of 0.0035. It happens because of little yielding of steel, the deflection and cracking of beam does not happen and provide enough warning prior to failure.

Failures in over-reinforced sections happen suddenly. This type of design is not approved in practice of beam design.

To get more in-depth information, go through the following video tutorial. 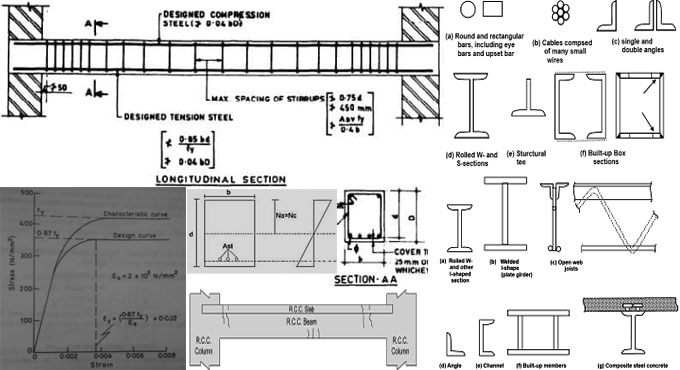