What are the Common Bridge Types?

Stated below is the list of 5 main types of bridges according to support mechanism:

The most common and basic type of bridges are the Girder bridges. The simplest example of a Girder bridge can be that of a log across a creek; there are two common girders used in steel girder bridges which are are I-beam girders and box-girders.

A careful examination of the cross section of the I-Beam will suggest the reason for its name. The web is the vertical plate present in the middle, whereas the flanges are the top and bottom plates.

A box girder is the one that takes the shape of a box. Two webs and two flanges are found in a typical box girder. Even though in certain cases, more than two webs are present thereby creating a multiple chamber box girder. Two other examples of simple girders would be pi girders, named after their likeness to the mathematical symbol for pi, and the second would be T shaped girders. The reason for not discussing these types in details is because most bridges are these days built with box or I-beam girders.

One of the most beautiful bridge types are the arch bridges. It is due to the usage of a curved structure that provides a high resistance to bending forces.

This bridge type can only be used in places where the ground or foundation is both stable and solid as unlike girder or truss bridges, here both the ends of an arc are fixed in the horizontal direction. Therefore, if a car or any load is placed on the bridge there is a horizontal force which develops in the bearing of the arch. Just like the truss, the roadway usually passes over or through an arch.

Listed below are four basic arch type bridges according to structure:

The definition of a typical cable stayed bridge will be that of a continuous girder which has one or more towers that are erected right above piers in the middle of the span. It is from these towers that the cables stretch down in a diagonal waywhich is commonly to both sides and it is therefore able to provide support to the girder. Steel cables are both extremely strong and flexible at the same time.

Due to its slender and light structure cables are a highly economical option which can even span to great distances.Even though there are some cables which are strong enough to be able to support the entire bridge but it is due to the wind that their flexibility makes them extremely weak to its force.

The design of the bridge is complex due to the unique properties of cables and the overall structure. The calculations become even more complex when winds and temperatures need to be consideredfor longevity. These calculations are only possible with the help of computer and computer analysis. Even the fabrication of cable stay bridges are difficult. In case of cable stayed bridges there are no distinct classifications.

The rigid frame bridge beams cross sections are mostly I shaped or box shaped. Compared to simple girder bridges the design calculations for rigid frame bridges are more difficult. Fabrication of the junction of the pier and the girder can be difficult and it requires perfect accuracy and great attention to details.

Amongst steel bridges, truss bridges are the most common ones. Many small beams come together to support a large amount of weight and can span to a great distance in case of Truss bridges.

In majority of cases truss bridges have a comparatively easy design, fabrication, and erection process.After the assembling of trussit can take up a large amount of space and, in case of even more complex structures, it can be a distraction for serve as a distraction to the drivers.

It is due to the small size of individual parts of a truss that makes it suitable for places where large parts or sections cannot be shipped or even where large cranes and heavy equipment cannot be used during erection. The roadway may pass over or even through the structure due to its hollow skeletal structure which allows a clearance below the bridge that is mostly not possible with other bridge types. 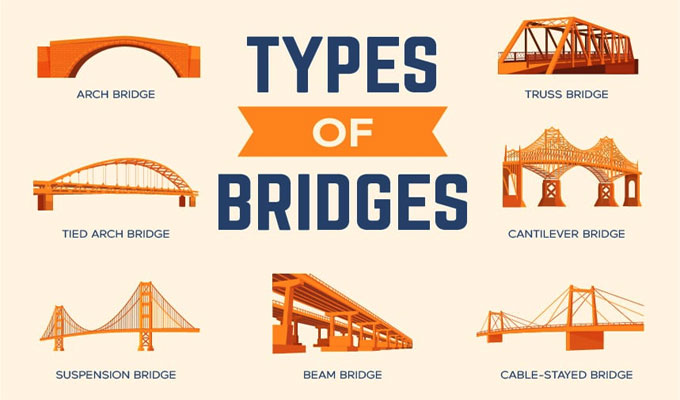