How to design Doubly Reinforced Beams

Further, in singly reinforced beams, there are two steel bars to be provided, but you need not consider the moment of resistance. However, when you do need to consider this, you have to provide additional bars to reduce the tension in the over-reinforced section.

In case of doubly reinforced beams, though, the matter is quite different. In this case you will have to find out the moment of resistance first! Then, you need the area of tension steel (Ast) and area of compression steel (Asc). Combined, they would overcome the Excess Bending Moment (Mu2).

When we begin designing a doubly reinforced beam, we need to be careful about some factors. For example, the depth of the beam may need to be limited to given values, be it for architectural reasons or otherwise.

The beam can be defined as a structural member that carries all vertical loads and resists bending. There are several types of materials used for beams, such as steel, wood, fibers, etc. But the most common material is reinforced concrete.

This type of beam is provided mainly when the depth of the beam is restricted. If a beam with limited depth is reinforced only on the tension side, it may not be strong enough to withstand the bending moment.

The resistance moment cannot be increased by increasing the amount of steel in the stress zone. To increase, the beam is reinforced, but not more than 25%, on the tensioned side.

This type of beam will be found necessary when due to head room consideration or architectural consideration the depth of the beam is restricted. The beam with its limited depth, if reinforced on the tension side only, may not have enough moment of resistance, to resist the bending moment.

By increasing the quantity of steel in the tension zone, the moment of resistance cannot be increased indefinitely. 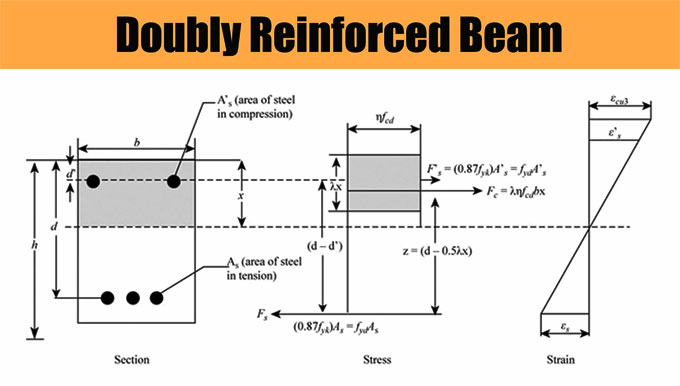