Flexible Pavement and Rigid Pavement - the major differences between them

The pavement on the road is the layered structure located directly above the subgrade as well as under the wearing surface of the road, which is responsible for transmitting the loads from the vehicles to the sub grade and underlying soil.

What do you mean by Flexible Pavement?

There are very low flexural strengths associated with flexible pavements, and they are flexible in their structural action under the pressure applied by vehicles. Wheel load stresses are transferred from the higher layer of the pavement to the lower layer of the pavement when this pavement is constructed. There is an even distribution of the wheel load over a wider area, as well as a reduction in the stress as the depth increases.

Asphalt is one of the most common bituminous materials that is used to construct flexible pavements. The top layer is supposed to sustain maximum compressive stress whereas the lower layers will experience a lesser magnitude of stress.

What are the varieties of Flexible Pavement?

There are generally three varieties of Flexible Pavement, they are as follows:

What do you mean by Rigid Pavements?

There is a great deal of flexural strength or flexural rigidity in rigid pavements. The load on this pavement is distributed by the slab action, and the pavement acts as an elastic plate that distributes the load evenly.

Concrete made of Portland cement and gypsum (PCC) is used to construct rigid pavements. In either case, the pavement materials are placed either directly over the prepared subgrade or on a single layer of granular or stabilized surface that has already been prepared. By means of slab action, the wheel load is transferred to the sub grade. There are joints involved in the process. The cost of construction is high at the beginning of the project. The rigid pavement has a high level of tensile strength.

What are the varieties of Flexible Pavement?

There are generally four varieties of Flexible Pavement, they are as follows: 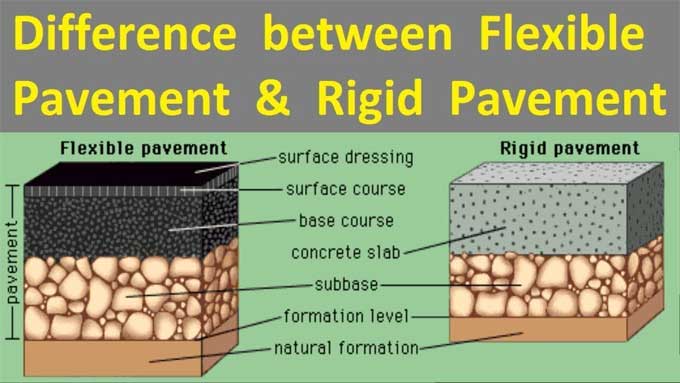