Types of formworks found in construction

Generally, steel or concrete is used in formwork to build part of the permanent structure. Temporary formwork can be struck and recycled from any inexpensive and easily worked material, timber, steel and GRC/GRP.

The formwork that should be utilized under the water, should abide by the following conditions :

a. Support the concrete in its designed profile during the plastic phase
b. Properly affixed into position.
c. Cover the concrete from scour, washout and abrasion till unless it gets solidified.
d. Endure mistakes in development level or alignment of adjoining work
e. Ability to resist the static and dynamic loading caused by concrete, tides, waves and currents.

The following types of formworks are mostly found :-

The formwork sheeting comprises of sheeting boards or prefabricated sheeting panels. The formwork sheeting is located on squared timber formwork bearers to be provided on main bearers capturing the forces to round timber columns. With smaller rooms, the main bearer along with two columns develops a trestle. Diagonal board bracings are arranged to manage horizontally acting forces. The round timber columns are arranged on double wedges which function as stripping aid and correction device.

Column Formwork: Same as beam formworks, the sheeting of column formworks is prefabricated based on the column dimensions from sheeting boards attached with cover straps.

The sheeting panels are arranged in a foot rim which is secured in the soil with steel bolts.

The foot rim consists of double-nailed boards. The foot rim must be exactly measured-in because it is decisive for the exact location of the column. It has the same functions as the thrust-board for foundation or beam formwork.

When the sheeting panels are implanted in the foot rim, vertical arch timbers are arranged to undertake the forces from the cover straps of the formwork sheeting.

Around the arch timbers, that contains the function of walers, column clamps of flat steel are braced with wedges or a rim of boards is provided same as the foot rim. Supplementary formwork tying with tie wires or steel screws is not required.

The distances of the clamps are mentioned in the formwork project. Generally, they are roughly 700 mm.

The column in the formwork is laterally fastened by diagonal board braces. 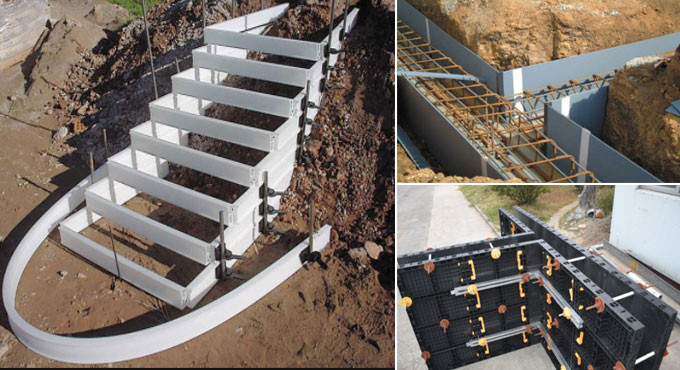