Everything about Geopolymer Concrete

However, only 40% of the infrastructure is already constructed, with the other 60% still to be done. This indicates that the globe still has to deal with additional pollution. Therefore, there is a need to switch industrial reliance on cement to some other sustainable and environmentally beneficial alternatives.

In the late 19th century, materials with inorganic molecule chains or networks were referred to as geopolymers. Waste products like fly ash and ground-granulated blast furnace slag are used to create geopolymer cement concrete.

By decreasing the demand for Portland cement, the usage of this concrete minimizes both the waste stock and carbon emissions. Thermal power facilities produce fly ash as a waste product, while steel companies produce ground-granulate blast furnace slag as a waste product.

The primary components of geopolymers are silicon and aluminum, which are obtained from naturally occurring materials or industrial byproducts that have been thermally activated.

An alkaline activating solution is then used to polymerize the silicon and aluminum into molecular chains and networks, resulting in a hardened binder. It is also known as inorganic polymer cement or alkali-activated cement.

Industrial wastes including fly ash, ground-granulated blast furnace slag, rice husk ash, and other waste products are deposited into landfills with the advent of industrialization, which is bad for the environment.

Since high aluminosilicate raw materials are necessary for the manufacturing of geopolymer concrete, using these industrial resources would lessen the environmental pollution load, which has benefits for both the economy and the environment.

When exposed to fire or hostile conditions, geopolymer concrete has been proven to perform better than OPC concrete and has mechanical qualities that are similar to those of OPC concrete.

Contrarily, geopolymer concrete is still in its infancy compared to OPC concrete, which has undergone years of functional investigations to serve as a foundation for design regulations.

Geopolymer concrete's early strength has been observed based on its experimental results:-

1. Various geopolymer concrete mixes have been tested both destructively and non-destructively, and it has been observed that the water-to-binder ratio and alkaline solution ratio are responsible for determining the mix design.
2. All samples' pulse velocities increased in comparison to the standard one when the ultrasonic pulse velocity test was performed on geopolymer concrete. In general, geopolymer concrete is made of high-quality concrete with little porosity.
3. It was discovered that Geopolymer Concrete, a green material, had better early strength characteristics than the other composites.
4. This environmentally friendly concrete is significantly more favorable and may benefit the industry by substituting cement.

The following observations have been made regarding durability:-

The use is the same as that of cement concrete. This material hasn't, however, been widely employed for a variety of purposes. Precast bridge decks, water tanks, retaining walls, and pavements have all been built with this concrete.

Pavements, sewage lines, retaining walls, aprons, aircraft taxiways, and many more structures may be built with geopolymer concrete. Given that it resembles conventional concrete in many respects, it may be utilized in locations where regular concrete is used.

They may be utilized to make fire-resistant dwellings that offer the residents greater protection than traditional concrete because of their superior heat-resistant qualities. In high-rise structures, it can also be employed in water tanks that are either above ground or below.

Due to changes in mix design proportions or a lack of study, geopolymer concrete is new and few people are aware of it. However, this does not imply that this concrete is inferior to other types of concrete. The aforementioned information makes it clear that it is stronger and more durable than regular concrete.

The cost criteria are the sole issue, which may once more be resolved by rigorous testing, composition changes, or by substituting future elements for the ones used now. It follows that such concrete may find widespread application in the future. 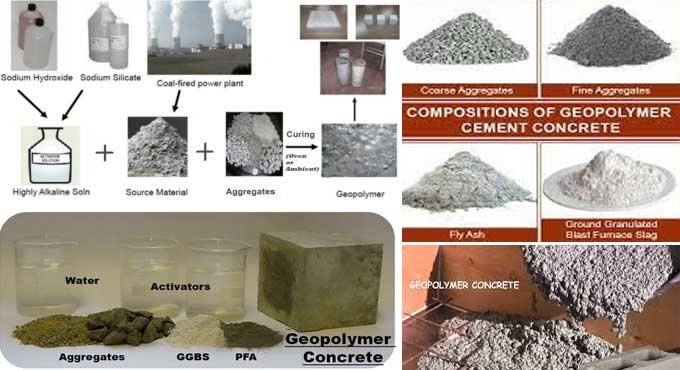