What is Grade Beam | Advantages and Disadvantage of Grade Beam

The grade beam is a concrete member used to form a horizontal connection between a pile cap and footing. Grade beams are not the same thing as wall footing, as grade beams can bend and typically extend between the piling cap and caisson, whereas wall footing is directly attached to the soil, transferring weight directly from the wall to the foundation.

Grade beams also differ from strap footings because grade beams reinforce walls to disperse their load to different foundations while strap beams strengthen columns between the foundations. Spreads with moments greater than the lateral load can use it to reduce the size of each footing on a spread.

Preparation and Excavation should be done for Grade Beam

1. Depending on the level of the beam, trenches have to excavate.

2. It is also possible to construct these beams directly on the ground and then level it and frame it.

Set up a Framework for the Grade Beam

1. Upon finalizing the excavation and preparation, the beams are placed based on the beam's dimensions.

2. These beams need to be erect on the ground by pre-positioning the bottom forms on their edges and mounting the reinforcement cage on a flat soiling brick before attaching the side shuttering.

3. When installing grade beams above the ground, the framework is similar to that of a typical beam; therefore, you should place shutters on both sides of the grade beams.

4. A grade beam with adequate reinforcement cover must provide once the beam framework completes.

Structural Reinforcement of the Grade Beam

1. In structural shapes, reinforcement details are described such as length and number of longitudinal reinforcement and stirrup spacing requirements.

Pouring Concrete to make the Beam

1. On-site concrete or concrete mixed by machine can pour, then the beam's side shutters can remove within 24 hours of pouring, but we cannot remove the bottom shutters until we have achieved solid gain.

2. A time period can be set based on the length of the beam to remove the bottom shutter.

I. Grade beams can form into any shape & size, which makes them flexible and easy to shape.
II. These beams provide excellent support for soil and concrete: They are capable of supporting both soil and concrete before being inserted.
III. They can allow easy access to other materials like rebar, conduit, pipes, or dowels.
IV. The installation of their products requires less excavation, which saves time and money.
V. This construction saved both time and money because of its shorter construction time and low labor costs.

I. Basements are not suitable for grade beam foundations.
II. The construction site must be level.

Often referred to as pile caps or caissons, grade beams are a component of a building's foundation that transmits the load from bearing walls to a spaced foundation. Each grade beam provides support to the structure.

A pile cap is mostly used when the soil bearing capacity is less than the estimated design load to transfer load from an inclined bearing wall to a supporting surface such as a caisson.

Read More:
Guidelines for making perfect structural design
Points to be considered prior to concreting ground beams and plinth beams 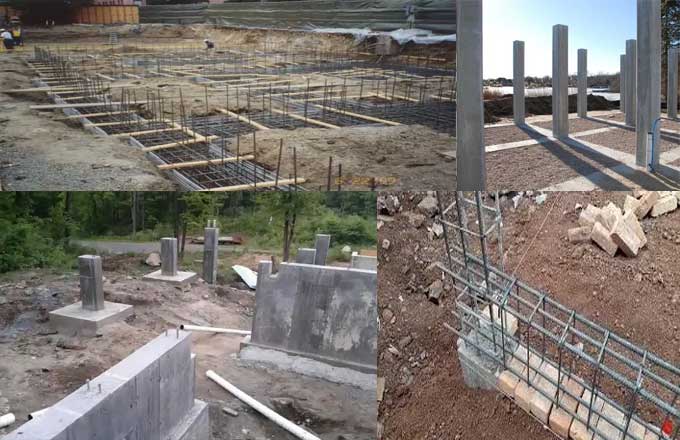