Gypsum plaster has been used as an interior wall and ceiling finish for thousands of years throughout the world.

You may be surprised to learn that gypsum plaster was used to finish the interior walls of the massive pyramids of Giza in Egypt built around 2,500 BC, 4,500 years ago.

In more recent history, gypsum plaster has been used to finish interior walls of many new homes built in both the United States and Canada, where it was applied by hand over wood lath.

Slowly but surely, however, this type of gypsum plaster application has been replaced by drywall with gypsum texturing, a less labor-intensive method.

Although drywall is made from gypsum, a wall built from the drywall and texturized with gypsum is radically different from a wall with gypsum plaster over lath.

Today, drywall has gained in popularity and has virtually eliminated gypsum wall plaster.

Nonetheless, gypsum is the main component of the joint compound used for drywall construction and is sometimes applied as a skim coat over wallboard.

Today, a number of straw bale builders in the United States, Canada, and Australia are finishing interior walls with gypsum plaster.

As you will soon see, gypsum can be applied directly to straw bales or over an earthen base coat on straw bale walls.

Gypsum plaster can also be applied to earthen walls, such as adobe and cob, either directly or over an earthen plaster base coat for interior applications.

Gypsum is a naturally occurring water-soluble mineral known by chemists as hydrous calcium sulfate, which is found frequently as well-formed crystals.

Some of these can be very large: single crystals with a diameter of six feet have been unearthed in Naica, Mexico.

Widely distributed throughout the Earth?s surface, gypsum is found in rather thick deposits among layers of shale and limestone and under salt deposits in the Earth?s crust that were formed as ancient seas evaporated.

In addition, gypsum is found in volcanic areas and in veins of metallic ores.

Gypsum plaster is made by heating gypsum at low temperatures to drive off water, to produce plaster of Paris a chalky, fast-setting material commonly used for molds and for casts to repair broken bones.

It can be mixed with time to form a fast-drying interior finish plaster known as gauging plaster, according to Bob Campbell, a 17-year plasterer who began work in Scotland.

Lime and gauging plaster, he tells us, aren?t very popular any more.

If gypsum is heated at higher temperatures, the resulting product is anhydrous calcium sulfate.

This substance is most commonly used to manufacture drywall and drywall compound. It is also used as an interior plaster.

Natural gypsum is by far the best plaster on the market. However, in its pure form, it may be difficult to locate.

Gypsum plaster is available in two forms: wet (in buckets) and dry or powdered form (in bags).

1. No shrinkage cracks in Gypsum Plaster

The gypsum reaction produces less heat as compared to the cement reaction with water.

So there are fewer Shrinkage cracks in gypsum plaster as compared to traditional cement plaster.

2. Gypsum Plaster is a high performance

This is the Sound Absorption index of Gypsum is high, and mostly the sound proof rooms use walls sandwiched with Gypsum boards, in order to reduce the outside sound and improve acoustics.

Gypsum covering on walls offer better acoustics in your home, which means lesser echo in the room and lesser intervention of outside sounds.

Gypsum, however, does not require treating with water and therefore saves a lot of water along with time.

It is extremely important to reduce water consumption.

Gypsum plastering uses less water, and hence is an ideal choice for arid regions, and otherwise too.

Gypsum plastering does not have this long waiting period. Gypsum plaster dries and settles in 3 days, and hence the construction pace is faster.

The construction time is saved manifold if the building is multistory.

In conventional sand cement plaster, one would have to wait for 21 days for each floor, whereas it will be just 3 days in case of gypsum plastering.

Gypsum plaster does save a lot of construction time.

Gypsum is very light in weight in contrast to sand cement plaster, and thus offers more strength when used in false ceilings and other cantilever designs.

Lesser weight on the frames makes them more robust and long-lasting and gives better protection even in case of natural hazards like earthquakes.

7. In the Gypsum Plaster not required curing

Gypsum can be directly applied over brick and also block work without separate finishing.

It is also very easy to apply and level gypsum plaster.

Gypsum is fire-resistant, non-combustible since it has a lot of water in it, and safe material to coat the inside walls of your home.

Gypsum plaster offers good insulation from heat, which means saving of electricity in maintaining the temperature of the room.

It can be easily applied to decorative purposes also and can be mold into different shapes.

Natural Sand, which is a raw material used in traditional cement plaster, is hard to obtain.

It is also banned in multiple states in India. 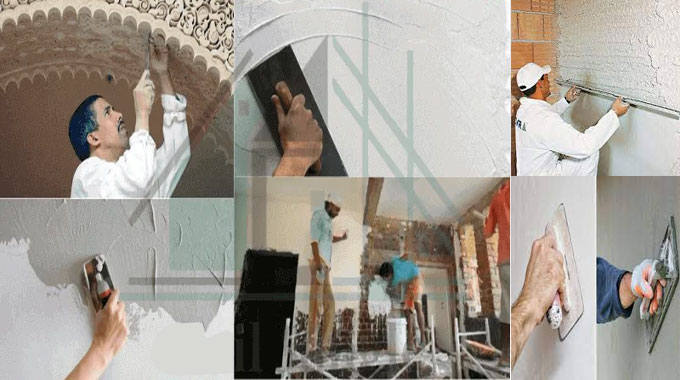