An Overview of Heliports and it’s Types

The pads may be made from steel, concrete, or aluminum. In places like hospitals, golf courses, skyscrapers, and private buildings, helicopter landing pads are commonly found. The ground or an elevation can be used to build heliports. A rooftop or elevated structure can be used for an elevated heliport.

5. Heliports on the ground are typically made of cement concrete with a minimum thickness of six inches.

6. Heliports are categorized based on their purpose. Hospitals, for instance, have an H painted in red with a cross outlined in the background. White is painted on all other heliports.

7. The maximum weight that can be handled by each heliport can be seen on it. Additionally, it must specify the maximum dimensions of helicopters permitted to land.

8. Heliports should have a minimum size of 40 x 40 feet. In addition, there should be no obstacles around heliports, and those areas should be at least twice as large as the heliport itself.

9. Pilots are provided with wind speed and direction data by wind cones located near the heliport. There are wind cones positioned on the helicopter approach path 150 meters from the Touchdown and Liftoff Areas so the pilot can see them.

10. The surfaces of heliports are nonslip. For visibility from the air, heliports are typically marked with an 'H' or a circle in concrete.

Heliports for the transport of large helicopters are located at airports that operate for airlines.

Most airports allow helicopters to perform separate services without interfering with airplane traffic. In the airports, helicopter boarding is accommodated in separate terminals and gates with interconnected passenger traffic.

Helipad matting is a portable material that is used to create a temporary helipad on a surface. It is designed to provide helicopter pilots with a visual guide to land their vehicles in a safe manner. 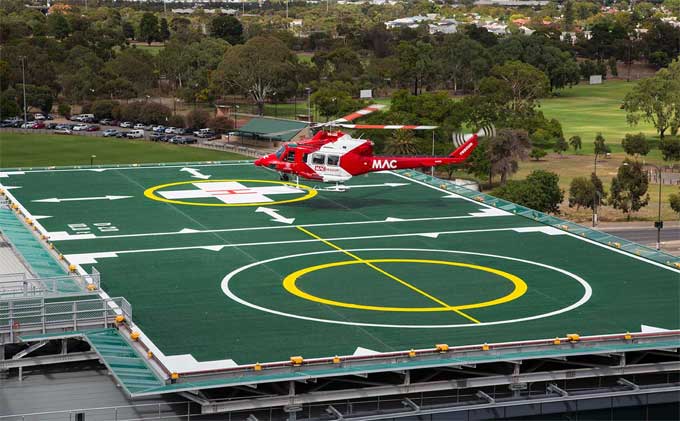