An Overview of Hidden Beam Design

The Hidden Beams are beams with a depth equal to the thickness of the slab. That is an extremely strong reinforced concrete beam, also known as the Hidden Beam.

In an attempt to take advantage of the beam-free headroom, some have invented The Hidden Beam. Therefore, a brick wall, which is a huge load, will not be compromised, and the floor height will remain the same.

As a conventional beam, it has a similar design, but its depth is limited and should not be greater than the thickness of the slab. Thus, the reinforcement ratio dept width of the beam may need to be increased around the cutout as well. A leveled and neat ceiling surface designs to improve architectural aesthetics.

Elevation and clearance of electromechanical ductwork must maintain to achieve maximum ground level. Thus, brickwork can construct over the slab without sacrificing floor clearance.

Hidden Beam is a technique for breaking up a large slab into manageable pieces.

For example, it distributes the weight of the brickwork masonry wall, which imposes on the slab. The slab can have a greater span. Architectural aesthetics are the sole reason behind hidden beams in the interior of buildings.

Roofs with a thickness of less than 200mm should not use this type of beam. The whole slab must be analyzed as well as the Hidden Beam if you want to make a concave beam. Column strips weaken the structure.

There is a 2% increase in hidden beams reinforcement. Loads can't be applied laterally to the Hidden Beam. In comparison with the normal beam, the Hidden Beam has a 10% higher vertical displacement.

It is generally used where slab thicknesses are considerable to insert Hidden Beams within the suspended slabs. Living and dining spaces are connected with this beam at an angle.

The ceiling surface will be cleaner and more level as a result. It installs electromechanical ductwork economically and also cosmetically. Commercial buildings are more likely to need this.

1. By reducing clearance needed for the floor, it saves space.

2. Saving labor and material costs is possible with this beam.

4. Buildings in the commercial sector would be more appropriate for this.

5. In providing hidden beam floors, the building can achieve a clean aesthetic appearance, as well as allowing access to electromechanical ductwork.

Due to its height reinforcement ratio, the Hidden Beam has a low ductility because it compensates for depth restrictions spatially by increasing height. Due to the right-angle orientation of the structural support span, it creates a spanning problem structurally.

Hidden Beams reinforce the depth of supporting slabs using a concrete beam, also known as a concealed beam. Since the steel beams can see, the slab depth and the hidden beam depth are the same.

Modern reinforced concrete framed structures use concealed beams as an essential component. In addition, Hidden Beams provided for strict and rigid architectural considerations. The load that might be brick walls will handle in this manner without compromising the height of the floor.

Where there is a substantial thickness in the suspended slabs, Hidden Beams are usually incorporated into them.

Between the living area and dining area, the Hidden Beams are angled, so they are right at right angles to one another. The ceiling surface will be cleaner and more level as a result. 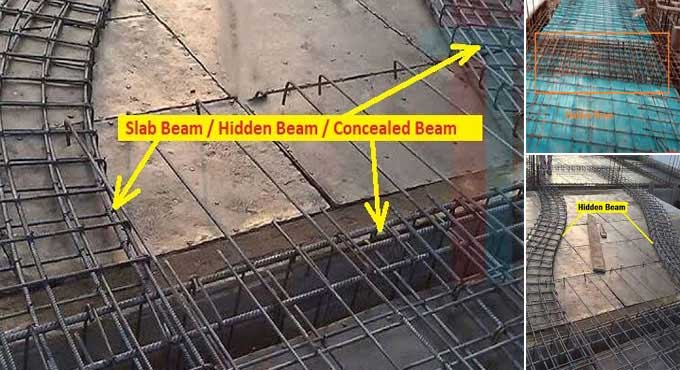