How to erect a bridge ? some vital guidelines

Given below, some necessary stages to construct a bridge in the public works sector.

Step One: The Foundations - The purpose of foundation is to disperse different types of loads of the bridge (mass, weight, overload, forces ?) perfectly based on the type of the ground of the structure.

The foundations are categorized as the following two types :-

? The superficial foundations: These foundations are ideal for the bridges with level adjacent to the ground since the structures are susceptible to reduced constraints in comparison with the wind and their gravity. It is also necessary that the rocks within the structure should be strong, undecomposed and not greatly cracked.
? Deep foundations: This type of foundation is effective while the bridge starts to obtain the height. Under this situation, it occurs consistently that the soil exposes a layer more stable in depth. At the time of construction, there are three situations which produce the following three types of foundation:

a. Referred to as ?good? soil, when it allows to set the foundations directly on a durable ground, is known as flat foundation.
b. Referred to as ?bad then good? soil, when it is required to place four piles in the unsteady ground unless they attain the steady ground.
c. The soil becomes ?unsettled?, when the quality of soil in the ground is not good. Under this circumstance, lots of piles should be installed to provide good resistance capacity severe compression.

Without resistance at depth, the support should be provided with ?floating? piles.

Second Step: Construction of Supports - The number of supports (abutments and piles) required for the construction of the bridge should be affixed concurrently on both sides of the shores. These supports are generally formed with concrete and either cast in place, or prefabricated in a factory and then assembled on site.

Third Step: Assembly and Start-Up of the Superstructure - Due to the final weight of the structure, the greater or smaller spacing among every pile and the final objective of the structure, it becomes complicated to apply the concrete for the construction of the deck which, over great distances, fall down even because of its own weight and of its traffic. For this reason, the elements of metal beams are used. These are assembled jointly to build up the structure of the deck.

On every shore, the beam elements are set up through a crane and the elements are then reconstructed with welding on site (Welded I-Beams). The deck is then provided with a launching nose, finished with a ballast at the back to resist tipping. Normally, the piles are driven with winches, cables and pulleys, the deck advances at a speed of about 9m / h. Also, this solution is substituted with restraint systems to stop runaway.

Fourth Step: Pouring the Slab - The beams are provided with connectors in the factory so that the steel structure is secured to the concrete slab of the latter. As soon as the beams are installed on their final supports, the lost formwork is arranged on them along with reinforcement prior to pouring a layer of concrete with thickness of about 25cm that will be the slab of the structure.

Step Five: Finishes - To complete the work, after several months, even years of construction, the final step is to provide asphalt on the road. Asphalt stands for a very specialized type of bitumen to resist expanding of deck. Thus, even with some deformations of steel, the bitumen will not crack and retain the quality to adapt the road traffic.

Several sensors are arranged on each strategic part (deck, cable stay, piles, pylons ?) and facilitate to constantly follow the state of the bridge. 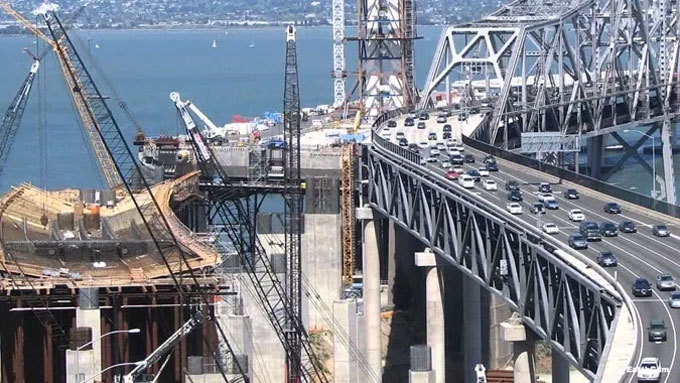