It gives a sense of stability to see brick buildings. Homeowners have welcomed exposed bricks on their homes, but they are not without problems. Brick walls often have cracks in them. Although cracked brickwork does not necessarily indicate a serious structural issue, it can lead to water damage and mold growth.

Cracks in brick walls can be caused by earthquakes or by aging. Your brick wall should usually be able to be repaired, so cracks shouldn't pose too many problems. Cracks tend to spread quickly and become larger over time, so it's important not to underestimate this problem.

Walls that support a structure are structural. A wall's multiple brick Wythes give it strength and width. They separate by an air space of about an inch, thereby making the wall thicker and more drywall-like. Bond courses of brick are laid across the Wythes to join them, or fasteners like steel fasteners or wire mesh are used to join the Wythes at intervals.

Wall masonry cavity walls have an air space between the rows of bricks to accommodate both dimensions of wall widths and drainage for brick Wythes. It is possible to cover some masonry blocks, stones, or even clay products with brick.

Structural brick walls are constructed with bond courses that connect their individual Wythes. Rather than the longer stretcher brick courses, bond courses are distinguished by the ends of bricks. A brick wall is defined by the ends in which bricks were placed across the Wythes of brick that make up the structure.

A vertically continuous masonry section has a thickness of 1 unit. The thickness of masonry is separating the flues of a chimney. The number of bricks in a wall determines its thickness. Brick veneer walls are one brick thick if full-dimension bricks are used. An additional layer of wall structure and veneer extends above the total wall thickness.

There is no support for true veneer walls. A brick fa?ade or a stone skin protects the building. The veneer was anchored to wooden frames to create the illusion of brick or stone. The brick veneer did not consider being structurally valuable since it is used only for facing purposes. The fa?ade of some structural masonry walls may be brick or a brick veneer that covers masonry blocks, stone or even structural clay products. It is structurally sound but has a brick, stone, or other veneer covering.

Point the Brick Wall: The pointer should be moistened with water and pushed into the joint to flatten it.

Remove the Crack Mortar from the Brick Wall: Ensure that all mortar excess is removed. So, you won't have air or moisture behind your wall, and it will last longer. Raise a raking bar over horizontal joints to remove old cracked mortar. Keep your depth in the wall at 1.5 to 2 cm.

Do not damage the bricks. As well as removing the vertical joints, remove the bricks at their end. If you are doing so, use a hammer and a chisel. If the mortar doesn't crack, tap the chisel with the hammer. Stay 1.5 to 2cm below the surface. Scrub all excess mortar away with a wire brush and a wire brush.

Patch The Joints with Mortar: Using a brick jointer, push the mortar into the joints after the mortar has been mixed well and matched to the wall color. Make sure there are no holes left unfilled. Be careful not to over mix the mortar when mixing it. In addition to expanding and contracting with the weather, bricks often crack again if the mortar is too hard.

Spray the Brick Wall: The wall needs to be sprayed with water after all the mortar is removed.

Dry brick walls will absorb all the moisture from a newly applied mortar, resulting in a wall that cracks all over again. 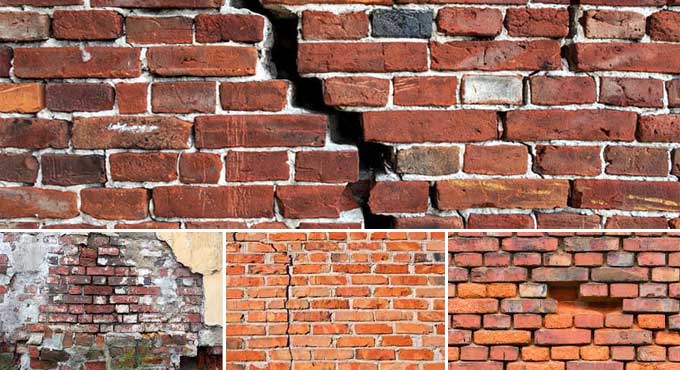