There are no specific measurements that define mass concrete. In order to minimize cracking, large volumes of concrete are required to be able to cope with heat generation from hydration of cement and volume change associated with it. A dam, a bridge pier and column, a mat slab, or foundations are examples of mass concrete.

In addition to larger structures, smaller structures can also be categorized as mass concrete based on a number of factors. This includes cement type and quantity, concrete volume versus surface area, weather conditions, concrete place temperatures, and how thermal cracking affects performance, durability, and appearance.

Temperature Monitoring in Mass Concrete - Why It's Important

Pouring mass concrete at a temperature between 50 to 60 °F and 10 to 16 °C will ensure it cures properly and reaches adequate strength. A low temperature slows down the chemical reactions that strengthen concrete and, eventually, stops them altogether. The concrete will have high early strengths, but subsequently lose strength in later stages if the temperature is too high, resulting in lower overall durability.

During cold weather concreting, the average daily air temperature is below 40°F or 5°C for more than half of every 24 hours for more than three successive days.

Ice and cold weather also slow down the curing process, causing concrete cracks and weakening because the water expands. It may even be impossible to use certain concretes in some cases. If the right precautions are taken to heat it properly & it can still be successfully poured and placed in winter.

Heat is generated during the hydration and hardening of concrete. Because of the difference between the structure's core temperature and its surface temperature, mass concrete structures are likely to develop significant tensile stresses and strains.

Therefore, the temperature differential is the result of this difference. When concrete gets warm and contacts with heat, it expands.

In mass concrete, thermal cracking is more likely when the inner core is heating up while the outer surface is cooling. Extreme cold weather exacerbates the problem, as it rapidly cools the concrete's outer surface but not its inner core.

Contractors and project managers could face problems if no temperature differentials are monitored in mass concrete, such as cracking, reduced service life, delay, and non-compliance. Concrete construction can be difficult to sustain because of these problems.

During hydration, concrete temperatures are generally limited to 70°C or 160°F. Concrete will have higher early strength development if the water temperature during hydration is too high, but will lose strength in the later stages, resulting in a less durable structure.

Further, such temperatures can interfere with concrete formation in the initial stage, causing it to form in the later stages which cause an expansive reaction and subsequent cracking.

During cold weather, you can control the temperature of your concrete by following these tips:

1. When the concrete is ready for use, it should be kept dry and heated.

3. You can optimize your concrete mix for heat retention in cold weather by using low-heat cement, aggregate substitutes such as fly ash, limestone, and slag, and a low water to Cementitious material ratio.

4. The layering of insulation helps maintain the heat generated by the concrete. It is possible to control the temperature differential between the slab's core and surface using insulation methods such as heating blankets or forms.

5. Use chilled water, ice chips or shaved ice to cool your mass concrete pour before placing it.

6. Use noncorrosive cooling pipes embedded in the concrete after it has been placed. A nearby source of cool water circulates here, removing heat.

7. It is necessary to remove standing water or to squeegee or vacuum up bleeding water. 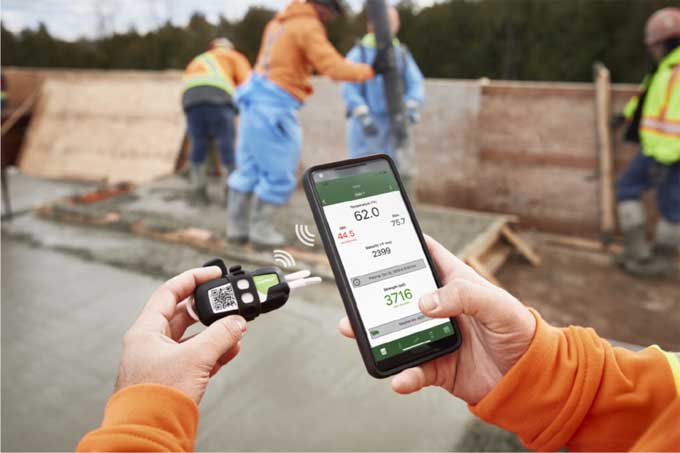