Types of Foundation and their Uses in Building Construction

Several structures such as bridges, dams, roads, and buildings are built by civil engineers to serve various requirements. Structures apply load on the soil on which they rest. If any structures are placed directly on the ground, the ground's soil will get overstressed and will not be able to support the structure safely. To safely distribute the load of the soil structure, some part of the structure is placed under the ground.

In layman's terms, the part of a structure on which a building stands is known as a foundation, and the solid ground on which the foundation rests is called a foundation bed.

Objectives of a Foundation

The main objectives of a foundation are:

What is Foundation Engineering?

Foundation Engineering is a field of study developed for students to study the structure's design, which supports other structures, most usually bridges, buildings, or infrastructures for transportation. It comes under the same circle as Structural, Civil, and Geotechnical Engineering. Foundation Engineering has a particular focus on soil-structure interaction.

Usually, all foundations are divided into two main categories - Deep and shallow foundations. These terms refer to the depth of the soil at which it is placed.

Shallow foundations are economical in nature, and the depth of the foundation is low. It is the most popular type of foundation and is used as a foundation for lightweight structures.

Isolated Spread Footing: It is the most recognizable and most uncomplicated type of shallow foundation. It is also the most budget-friendly option among others

Strap footing or Cantilever: A footing is called a strap footing when the isolated spread footings of two columns are connected by a strap beam.

Mat or Raft foundation: Mat or Raft footings is a kind of combined footing that covers an entire area underneath a structure and supports all the columns and walls.

Pile Foundation: Pile, is the recurrent type of deep foundation. They are used for cost reduction and according to soil quality considerations.

Pier Foundation: Piers is an below the surface structure that transmits a considerable load, which could not have been carried by any kind of shallow foundations. 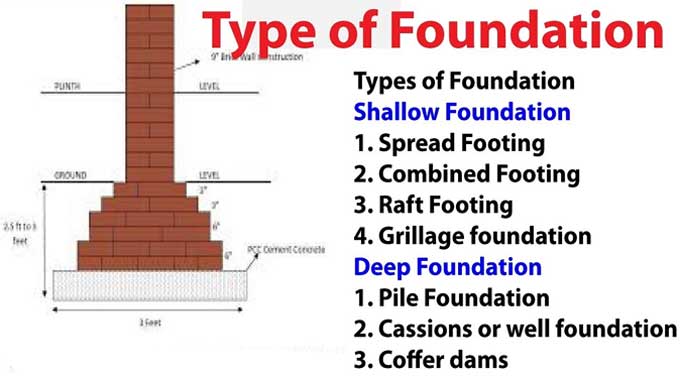