Putting the Pieces Together in Bridge Construction & its Methods

Construction methods may differ drastically depending on the size restrictions and accessibility of the bridge. It may be possible to stockpile materials, stage equipment, and control traffic on one site while restricting it to another. When it comes to the former, in-place fabrication may be possible, while prefabrication is more likely with the latter.

The fabrication process may view as one of several categories in the erection of a bridge. It makes prefabricated elements more easily transportable when they are large or far away.

Infrastructure development depends on bridges of all kinds. There are many types of bridges, from pedestrian walkways to stunning spans on spectacular gorges. One project can benefit from the use of more than one construction technique.

The method allows for the construction of dams of complex and unusual geometric shapes at a relatively low cost. As part of the construction process, temporary framing and scaffolding provide temporary support for structural elements.

In order to build a span, you install or fabricate segments on either side of a supporting pier. A bridge can span from 50m to 250m using this technique. You can use precast or cast-in-place construction methods. There are alternative ways to connect segments in peer-supported cantilevers. It is the most appropriate choice for long-span bridges, bridges of irregular length, and bridges using cable-stayed systems.

Despite its origins in cantilever construction, this construction method has contributed to a number of new inventions. It is possible to span 60m with this method for long bridges and viaducts. Building the deck involves placing segments at one abutment and then continuing to the opposite end. It is more common to use an assembly truss for positioning segments rather than a temporary staying mast system.

A moving crane or cranes are used to place and hold structural elements as construction progresses, either on the ground, on barges, or on the bridge itself.

Basically, it involves hoisting structural components from one span to the next and transporting them horizontally from one to the next with the help of a horizontal steel framework.

Benefits of stress in Bride Connection

The importance of pre-and post-completion loading is another interesting feature of modern bridge construction. Due to the fact that a bridge is only truly strong when its elements are connected, pre-stressing must be done on each element before it can be connected. Once the suspension is completed, the deck is then applied over the top.

Concrete has low tensile strength, so this is vital. In addition to bridge construction, understanding these concepts is essential for bridge maintenance and inspection as well. Insufficient post-tensioning can be evident in bridges significantly deviating from their load lines or tensile micro-cracks in concrete beams.

It is not only easy to explain these concepts, but they are also time-consuming, costly, and difficult to implement. It is imperative for bridge engineers to continually innovate in order to meet stringent deadlines, minimize injuries, reduce costs, reduce inconvenience, move in, move out, and stay out.

A couple of examples of efficient bridges are the Howrah Bridge in Kolkata and the Golden Bridge in San Francisco. Engineering is continually improving, so new innovations are always on the horizon. 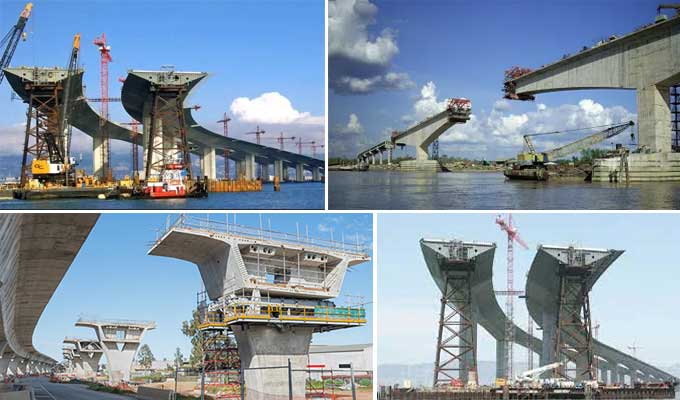