All things you must know about the Narendra Modi Stadium

One of the most premier cricket grounds in India, The Gujarat Cricket Association-owned Sardar Patel Stadium, more popularly known as Motera Stadium, has been renamed as Narendra Modi stadium on February 24, 2021 after the prime minister of India.

The cricket ground is located in Ahmedabad city in the state of Gujarat. Before being demolished in 2016 to create a new stadium with a lot of more seating capacity and modern facility, it was a regular venue for Test and limited-overs cricket. The reconstruction ofMotera Stadium was estimated to cost Rs 8 billion.

After the Gujarat government donated 100 acres of land on the banks of the Sabarmati river in 1982 the Motera Stadium was constructed.Within the nine months the construction work was completed. Before the construction of Motera stadium international cricket matches were played at Ahmedabad?s Municipal Corporation Stadium.

In 2016 the reconstruction work at Sardar Patel Stadium began. When Narendra Modi was the president of Gujarat Cricket Association and Chief Minister of Gujarat, he proposed for a new stadium with a much larger seating capacity.

The Motera Stadium was designed and rebuilt by principal contractor Larsen and Toubro.

Spread over 63 acres the new Motera Stadium has three entry points. There are 76 corporate boxes with a seating capacity of 25 each. Along with this,it also has an Olympic-size swimming pool and four dressing rooms. Instead of flood lights the new Sardar Patel Stadium will have LED lights installed on the roof. Walter P Moore has been consulted for the designing of the roofing at Motera Stadium. The PTFE, or polytetrafluoroethylene, which is a Teflon-coated woven fiberglass, was stretched across a circumferential inner tension ring and an outer compression ring. Between the bowl and the roof these rings float through radial cable spokes to allow for movement in case of seismic activity.

In 1984-1985 the first One-Day International (ODI) between India vs Australia bilateral series was hosted in the Motera stadium where India lost.

For the 2006 edition of the ICC Champions Trophy the Sardar Patel Stadium was among the various other venues where five of the fifteen matches were hosted.Everytime that India hosted the ICC tournament Motera Stadium has always been a venue. During the 1996 World Cupthe first World Cup match played at Motera Stadium wasbetween England and New Zealand. In the 2011 World Cup, India defeated Australia in the quarterfinals here, and went on to become the champions after defeating Pakistan in semi-final and Sri Lanka in grand finale. It has hosted 12 Tests, 23 ODIs and one T20 International up until August 19, 2017.

Following are the key facts about Motera Stadium:

Important memories related to the stadium:

Sachin Tendulkar scored his first Test double-hundred in a match against New Zealand in October of the year 1999.

Sachin Tendulkar became the first-ever cricketer to score 18,000 runs in One day cricket in a match against Australia during 2011 Cricket World Cup. 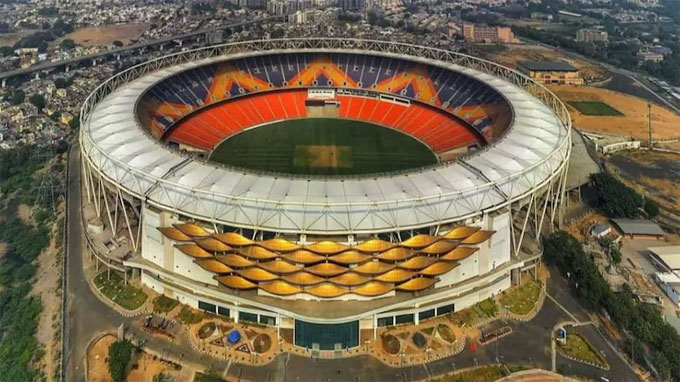