On site demonstration of mixing and placing concrete

In this construction video tutorial you can get live demonstration of blending and positioning of concrete in the jobsite for slab or road.

Mixing: Mixing of concrete is one of the most crucial factors for obtaining good final properties and for this purpose proper equipment should be utilized.

So, it is suggested to employ ready-mixed concrete to get the best result. Mixing allocates the aggregate uniformly during the cement paste and it makes sure that all of the cement is completely saturated in water, and eliminates large air voids.

Besides, mixing separates agglomerated clusters of cement particles and facilitates air entraining admixtures to produce the perfect air void system. Undermixing can produce large flaws and therefore leads to poor strength, whereas overmixing consumes time and energy and can demolish entrained air voids. If the workability is lower, the more mixing energy and mixing time is necessary.

Placing: As soon as the concrete is blended sufficiently, it should be placed into the formwork to determine its final position and shape. If it is required to reinforce the concrete, the rebar should have been placed properly in order that the concrete can flow around it.

If the concrete mixing truck is available adjacent to the site, then the concrete should be directly poured into the forms. If it becomes difficult, the concrete is transmitted in buckets through a crane or wheelbarrow.

If it is impossible because of the necessary distance or the size of the job, the fresh concrete has to be pumped via a system of pipes or hoses to the site with the special concrete pumps. Concrete that is to be pumped contains more severe needs for workability.

If the concrete gets too dry, it will not pump properly, whereas if it gets too wet it will have a tendency to segregate. Segregation may also happen if the concrete is poured into the formwork too rapidly, because larger aggregate particles will be subject to be pushed downward.

In slab construction, the placing has to be initiated along the perimeter at one end of the work with each batch arranged against transmitted concrete earlier. It is suggested not to dump the concrete in independent piles and then level and work them jointly; nor should it be placed in large piles and carried horizontally into final position. 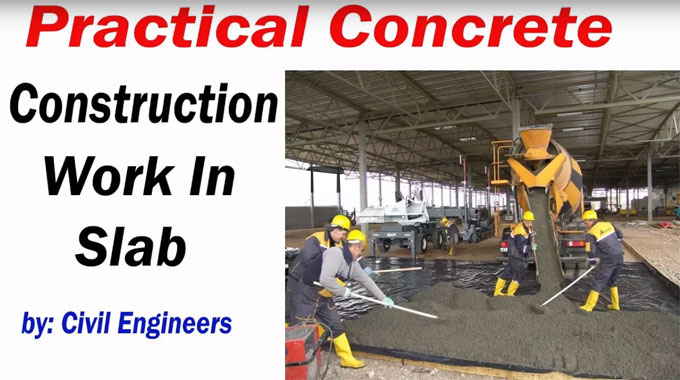