Brief Explanation of Pedestal along with its Benefits & Drawbacks in Construction

Pedestal serves as compression elements when supporting elements, such as columns, statues, below ground level. Generally, it uses beneath metal columns. Pedestals are usually wider than they are tall. It was uncommon to use pedestals in the early days. Later, Architects discover that the loads transfer to the column when the column is subject to them.

Pedestals are structural members between columns and footings, which distribute loads evenly on the footings. The construction of Pedestals on footings and columns reduces this tendency of loads.

A pedestal designed for a small load-bearing column has no reinforcements and is less than three times its width in height. It is common to use hollow concrete blocks and fill the hollow place with concrete. However, this is only applicable to small load ranges. However, the construction and design of footbridges for major loads are similar to those of reinforced columns. The pedestals also incorporate reinforcement. However, it only represents 0.15 percent of the cross-sectional area.

Vertical reinforcement, ties, and dowels are necessary for pedestals whose height is more than three times their width. For the column and the pedestal, the mortar is the same. It is theoretically possible to reinforce in the same way as footing, but it is not feasible in practice. A pedestal should have a larger area of contact with a column than its height to prevent bending and shearing.

Compression elements, such as footings, are designed to transport loads from supporting structures above the ground to footings below.

The metal columns usually support it. Generally, the width of a pedestal is greater than the height.

There is a possibility that the column section may come into contact with the subsoil below the column.

A pedestal provides very little chance for the column section to come into contact with the subsoil earth.

There is a possibility of structural failure in the footing and buckling of the column if long and thick supporting elements are placed on thin footings.

The height of the column will become short if a pedestal is placed in between the footing and the column due to the increased elevation, which substantially reduces the tendency of the column to buckle.

When this occurs, it is necessary to reduce the thickness of the fitting. The pedestals are very useful for such soils because they act as supports over thin footings, and they can be used to construct thin footings.

The upward soil pressure on the footings imposes moments, the maximum of which usually appears at the intersection of the footing and the column. With a pedestal, the footing base slab becomes more moment-resistant as well as less prone to deflection.

Unlike a compression member, there is no way of evenly distributing the loads throughout the entire footing. When the height of a pedestal exceeds twice its thickness, vertical reinforcements can add to the corners. Vertical reinforcement provides the pedestals with the ability to resist temperature changes & shrinkage. The pedestals also protect during the construction of the column above it.

Since the steel column is below ground level, continuing it into the footing would be risky. Water may corrode the steel bars below.

A pedestal's only drawback is that it requires additional reinforcement to fix and additional concrete to construct. In highly impacted areas, the cost of the project increases, which is undesirable. 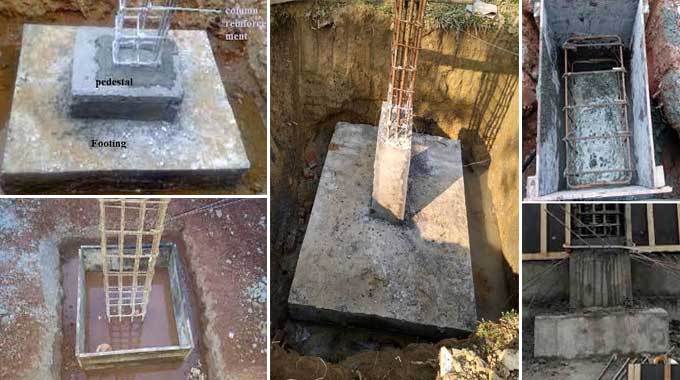