Temporary construction site work: This type of construction works are part of the project that enables us to build permanent site work, as per Code of Practice for temporary works procedures and the permissible stress design of false work (BS 5975:2008).

Temporary works are removed after use for instance props, shoring, excavation support. Temporary constructions are also a part of permanent works but only in certain situations. For example haul road foundations and crane or piling platforms may be used for hard standing or road foundations.

Mass grading: After demolition and cleaning of a site, dozers, excavators or loaders are used to obtain the required elevation of the ground. This is called mass grading. All the machines that are involved in this process can perform certain operation such as-

Fine grading: After the completion of mass grading, fine grading takes place. In fine grading finishing touches are added to the final project. Fine grading require high level of accuracy and great attention to detail hence only highly trained and experienced personnel can execute such a task.

Compaction of soil: In soil compaction soil particles are held close to each other by employing machines, this enables soil to release air hence mass density increases. This is required to improve the property of the soil which necessary for the construction of earth dams, canal embankments, highways, airport runaways etc.

Excavations: Excavation involves the process of moving earth, rocks etc. This is done using tools, equipments and explosives. Here, we also have to understand the centre line and excavation drawing, setting out plans and removal of excess oil. It also includes wall shafts and tunneling and underground.

Scaffolding: This is a temporary work that is used to support workers and their equipments. It acts as a platform to carry the work equipments. This is made using timber or steel. It should be strong and durable to support both workman and the construction materials. 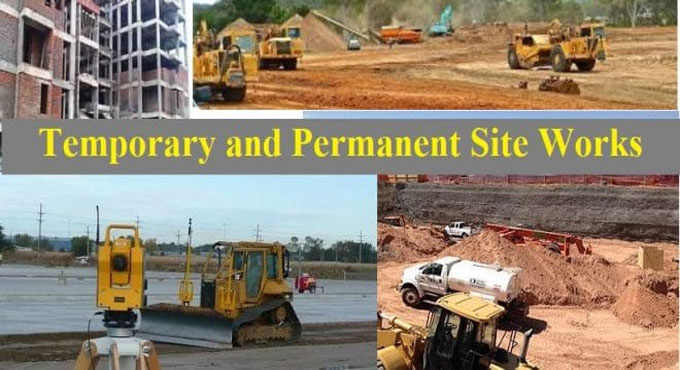