7 difference between Plane and Geodetic Survey

“What is Survey”, so the simple description is that, survey is an art of understanding whether the things are reacting in relation to each other. A particular object is thoroughly measured based on the length, wide its elevation, objects each angles were thoroughly judged by the use of specific surveying instruments.

Why do we need proper surveying?

1. Through proper surveying we can verify its relative locations of particular objects.

2. It is basically used to measure the area and perimeter of particular objects.

3. It can also be use be used to create wide layout of various structures on the ground like buildings, terrains, highways, canals, railway section eta.

4. Topographical map of any district or state can be created by surveying that shows natural features like lakes, ponds, canals, terrains, etc.

5. It is also used to create a map that could show the boundaries of fields, individual plots etc.

7. Through different types of survey many towns and cities gets developed roads and highways. Mining locations can also be determined, militaries also depends on surveying to develop their strategies.

Plane Survey: According to this kind of surveying earth is considered as flat in shape for which the results might get affected. It is basically used to create a layout of relatively small area of surface.

1. This kind of survey, calculate by considering that the earth surface is flat in shape.

2. As this survey considers the surface of the earth as flat in shape so the accuracy level got compromised a bit.

3. It is basically used to calculate the small area with not more than 250 km2.

4. The Line that is joining by two stations is considered to be straight.

5. The curved section of the Earth surface is completely ignored.

6. Plain Survey has their own outdated instruments as it cannot measure much wider and larger areas. Instruments like measuring tape, chain etc is used.

7. It is relatively Economical and cost efficient mode of Survey.

Geodetic Survey: According to geodetic survey or also referred to as Trigonometric Survey earth is considered as spherical in shape due to which the results is more accurate compared to Plain Survey. It provides accurate large scale coverage.

1. This is a kind of survey, which always considers the earth surface as a spherical in shape.

2. As Geodetic survey takes the curvature of the earth is taken into account, for which the result is more accurate compared to Plain Survey.

3. It is used to calculate large portion of area more than 250 km2.

4. The line that is joining any two sections is considered as Spherical in shape.

5. The curved section of the earth is taken into consideration.

6. Geodetic survey is more technically advance form of survey where GPS tracking and other modern facilities are used.

7. It requires Topographical and trigonometric knowledge. 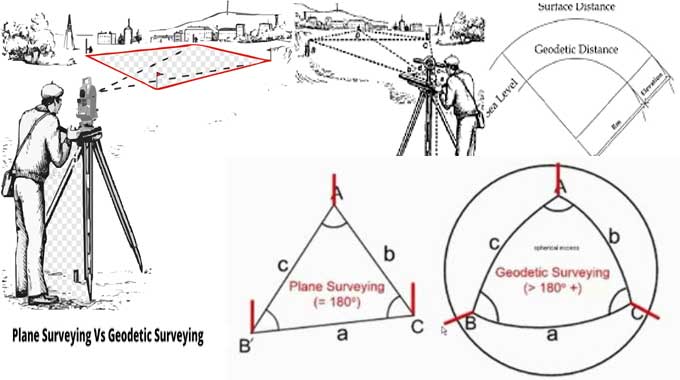