Definition of Plum Concrete: It is formed by amalgamating coarse aggregate and cement which are set underneath the foundation or footing of a structure in order to attain a level surface for allocating the load equally.

The plum concrete is actually an inexpensive variation of mass concrete.

The plum concrete is suitable when the desired thickness of PCC is extreme or large.

It is primarily provided under the foundations where the quantity of leveling course could be too much because of steep slope of the strata.

1. The plum concrete is applied underneath the footings of residential buildings with small portion where the slope of ground under single footing is 1:10 to 1:50 in order to save the cost of concrete. It leads to huge reduction of the overall construction cost of the building.

2. Plum Concrete is also suitable in areas where considerable concrete placements like concrete dams or bridge piers are necessary. Under these types of situations, pieces of rock about 150 mm in size are utilized as coarse aggregates to blend a plum concrete.

Step 1 ? Transportation of Plum Material
The boulders contain large Stone size which are simply upraised by laborers, not too big or small.

Step 2 ? Leveling and Cleaning ? Arrangement Of Surface
Preliminary, the surface should be perfectly leveled and cleansed by eliminating soft soil that can produce low bearing capacity. As soon as clearing and grubbing are completed, water is sprinkled to the surface to keep it wet prior to arrange plum concrete. The purpose of sprinkling water is to retain exact bond of plum concrete with the ground surface. As soon as the water is sprinkled, anti-termite chemical is sprayed to keep the foundation of the structure undamaged.

Step 3 ? Pacing and expanding of Plum Concrete
Boulder?s are put on the ground layer by layer with little spacing and concrete is distributed with pump all over the boulders in each layer that gradually penetrates inside the spacing among boulders. It allows tying it perfectly, once the concrete is poured, boulders are provided to the concrete again and the process is reiterated till desired level surface is attained.

Step 4 ? Curing of Plum Concrete
Curing should be accomplished for at least next 7 days. Jute bags are laid on the entire area of plum concrete to keep moisture for a prolonged period after curing.

Boulder?s should be examined prior to spreading and if any dirt or Clay is detected, then it should be cleansed perfectly. Boulders should be well-built and should not be flaky as the load from entire building will be enforced upon it. Sometimes, more boulders are required in case of shortage of concrete or for economical purpose etc. 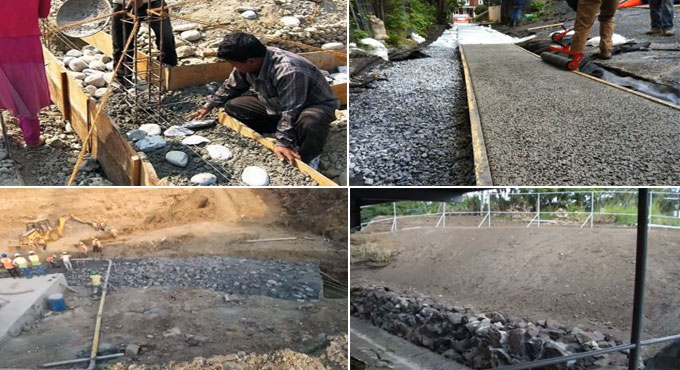