The traditional concept of Pony Walls has never gone extinct but has remained less popular regarding home renovation. As a lower-height partition wall, the Pony wall can also be referred to as a half wall or a half wall with a lower height.

In a home, the pony walls are used to create space separations between the rooms in addition to the interior decoration of the house. There are several materials that can be used in the construction of half-walls, including wood, gypsum board, steel, and others.

Pony walls are also known as Knee Walls, and they are low-rise wall structures that aren't built from the ground up, they are also called pony walls because of their design.

As a great way to keep an open atmosphere while also separating the areas of a large room, these walls are exceptional for separating areas of a big room.

It is necessary to remember that pony walls have top and bottom plates, which are horizontal elements that hold together the vertical studs, which are affixed to these plates. There are exterior surfaces of these walls, which can include foundation walls as well, that get structural coverings in the same way that any other wall, including plywood, would acquire structural coatings. In addition to finishing the pony-type interior walls, drywall has also been installed in the basement.

There is also a general usage for the pony wall construction for additional storage spaces. These kinds of walls can be made more useful by adding shelves, as well as drawers into the divided space so that the space is much more easily accessible.

Various Uses of Pony Walls in your home

A pony wall can enhance the function and overall aesthetics of a room in the following ways:-

As well as common use in bedrooms, pony walls can also assist to provide privacy in bathrooms, allowing homeowners to have a safe and secure experience. The glass walls with the tops of the ceilings can also be constructed in the shower to create a distinct look that gives it a distinctive look from other rooms in the house.

There are two ways in which you can use the pony walls as a bookshelf. A simple way of transforming the wall shelf into a wall shelf is by simply leaving out the slots at the top of the wall and removing the top of the wall open. It is also possible to add a shelf on top of your pony-type wall in order to store your books in a closed state.

An ideal way to create a mudroom would be to construct a pony wall separating the main living area from the entrance area, as well as create a mudroom between both. There should be a wall behind which all footwear and outdoor accessories should be kept.

It is important to note that this additional wall space is not only valuable for providing a sturdy foundation for you to connect a railing too, but it also gives you additional wall space for decorating. It is much more common for designers to construct a wall along one side of an entrance rather than installing complete walls on both sides of a falling stairwell.

Because of the short height of these pony walls, they are useful as a means of separating a play space from a home for children. You can use it to provide a playing space in various areas of your child's room or to divide different rooms in your child's home.

You can customize these half-sized pony walls in a variety of ways depending on the style that you want. In addition, you have the option to choose the location, the size, the material from which it will be built, and also how it will be finished, based on what you want.

There is no need to worry about pony wall construction being complicated. Building a pony wall essentially involves selecting a site, choosing materials, and actually building it if you do it yourself.

Open floor plans can be enjoyable because of their openness and natural lighting, but you may dislike how they seem to run around each other. If you want to feel isolated or dark in your home, then you can build pony walls here as well as there to separate rooms or portions of your house. 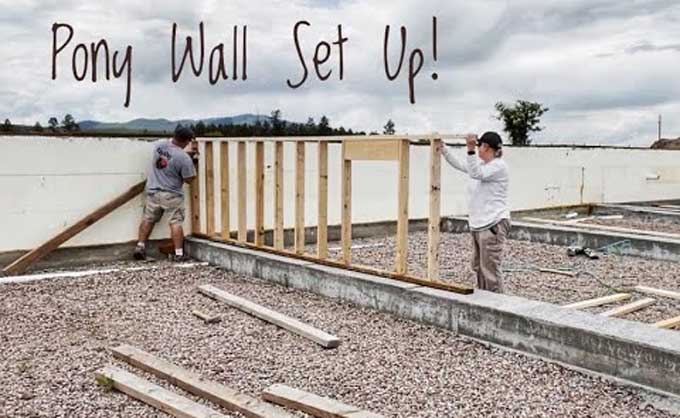