The fundamentals of setting up Post-Tensioning Slabs

Construction of post-tensioned slabs on grade is equivalent to apply reinforcing steel, devoid of the tensioning step.

Cables are set up as per instructions of the engineer and placed to go over the center of the slab. For residential construction, tendons at 48 inches on center are generally accepted. Commercial foundations will contain much more steel. Tendons are routed around obstructions smoothly.

Generally, a residential post-tensioned concrete slab should have been 8 inches thick with 3000 psi concrete. As soon as the concrete achieves strength to 2000 psi, normally within the 3 to 10 days as suggested by PTI, the tendons are stressed.

Now-a-days, tendons are seven high-strength steel wires wound together and arranged inside a plastic duct. A PT anchor is situated at each end and these are found in pockets which are implanted into the slab edge. As soon as the strands are stressed, the wires are expanded ?about 4 inches for a 50 foot strand?to employ 33,000 pounds of load.

The qualified workers should be appointed for doing stressing. Once the stressing is completed, the tendon is cut off and the pocket in which the anchors are situated is filled with grout to defend then against corrosion.

Bigger structural concrete members may also be post-tensioned, particularly in bridges and floors and beams in parking structures. The process is equivalent to that applied for slabs, with the exception of a bigger scale. The tendons will frequently be "draped" in order that they are low at the midpoint of a beam and high at the supports?this arranges the steel at the point of highest tension where it can retain the concrete to be remained together firmly.

With structural members the duct is frequently grouted full following stressing to tie the strand to the concrete along its entire length?these are known as bonded tendons. Unbonded tendons are mostly found in residential slabs and stay free to progress within the duct and are safeguarded from corrosion with grease.

The position of PT tendon and stressing is normally performed with companies with certified workers having expertise in this type of work. 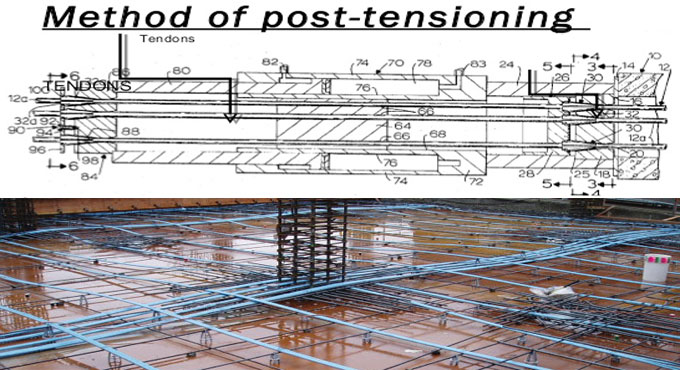