How to work out the rolling margin for reinforced steel

Rolling margin means the proportion of deviation in permissible sectional weight of reinforcement steel according to IS codes. Reinforcement steel is ejected from a mould that is formed with a specific size e.g. 8mm Dia. When the mould is completely new, the sectional weight of 8mm steel ejected via mould will remain lower than that .i.e. 0.395kg per Metre or lessor according to IS codes.

Mould will be expanded in due course of time or once specific quantity of production is extracted from a specific mould.

Now, similar 8mm dia bars are ejected from the equivalent mould and they will gain more weight per Metre, as for example 0.400Kg per Metre rather than 0.395 as per IS. It sinifies more mass per Metre/Length is necessary for same length.

This deviation in weight as per IS code-1786 for several dia is given below :-

The measurement of rolling margin is done in the following ways :-

Rolling margin is the variation among the theoretical and actual weight of steel. It is caused by the die utilized for casting of rebars. As time goes, the shape of die is modified and consequently the diameter of the steel bar is also altered that leads to disparity in unit weight of steel.

The size of the die is retained small and accordingly rolling margin is negative in the preliminary phase of production, after that it is more of less near to theoretical weight and then the size of die is raised that causes to put rolling margin on positive side.

If the steel is brought from similar supplier over a period of time the rolling margin would be revised and no loss will be occurred. 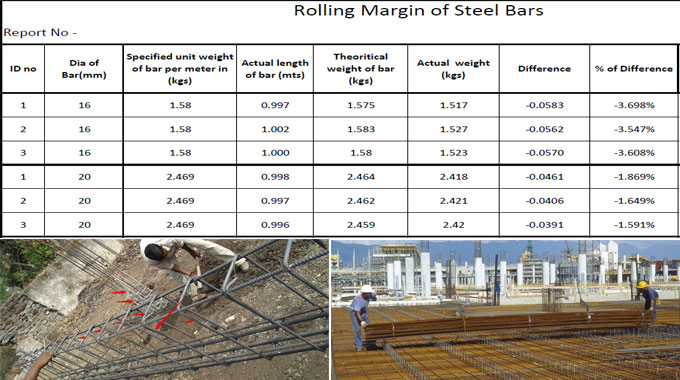