Concrete Segregation and Bleeding During Construction

Concrete is good when the constituent components are properly classified to form a homogenous mixture. Cement has a specific gravity ranging from 3.1 -3.6g/cc, which is the primary cause of segregation in concrete. Concrete sees aggregate segregation due to these differences in aggregate density, which lie between 2.6-2.7g/cc for aggregate.

A. Long-distance transportation of concrete mixes.
B. Unbalanced mix. Insufficient matrix binds aggregates.
C. Concrete is dropped from a height of over 1 meter.
D. Long vibrations of concrete.

A. The proportioning of the mix can control segregation.
B. Concrete is placed, transported, compacted, shaped, and finished in a peculiar way.
C. Segregation is controlled to some degree by adding air entraining agents, admixtures, and materials to the mix.

Types of Bleeding in concrete

There are three ways for concrete to be segregated.

1. Concrete bleeding results from the segregation of water over the top of the concrete.

2. The bottom or the corners of the formwork may segregate the coarse aggregates.

3. The cement paste segregates out of the concrete mix.

A bleeding concrete mix occurs when the cement and aggregate settle, pulling the water upwards. Water has low specific gravity, and as a result, tends to rise. Wet concrete will usually bleed.

It may not be harmful to the concrete to bleed when it is fully plastic. In contrast, concrete remains in the plastic stage after it is compacted and subsidized.

It may not be harmful to the concrete to bleed when it is fully plastic. In contrast, concrete remains in the plastic stage after it is compacted and subsidized.

Bleeding Effects the stability of Concrete

1. When bleeding occurs, a certain amount of concrete is carried along by the water along with the bleeding. Having the top surface worked up with a trowel causes the aggregate to go down, and cement paste to form on the top surface. Because of Laitance in concrete, structures may become less durable.

2. Continuous channels are formed when water moves from the bottom to the top. This allows water to pass through the concrete and creates voids in the matrix which in turn weakens the bond between aggregate and cement paste.

3. Surface finishing of concrete is delayed by the formation of water at the top surface.

4. Permeability and homogeneity of concrete are compromised.

5. The concrete and reinforcement become loosened by excessive bleeding.

Controlling the Bleeding in Concrete

A. Minimum water content in the concrete mix is responsible for controlling bleeding in concrete.
B. Introducing air entraining admixtures to the mix.
C. Increase the cement content in the mix.

During the transition of plastic to stiffen state, segregation of concrete is all plays a role in causing bleeding in concrete. Concrete segregation is the separation of aggregates, pastes, and water from a homogeneous mixture of concrete.

Concrete construction involves evenly coating coarse aggregate with sand and cement paste made from a homogeneous mass of good-quality concrete during handling, transportation, and placement. Concrete segregates during transit due to compression and vibration, which separates cement paste and sand from the coarse aggregate. 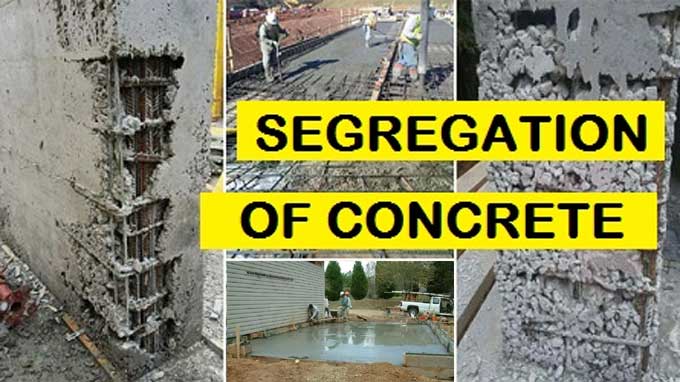